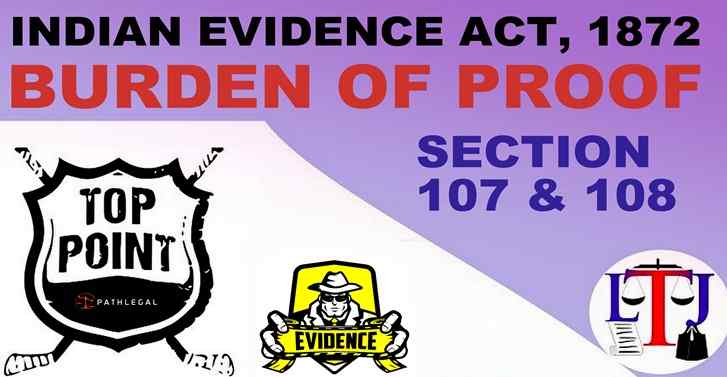 Indian Evidence Act 1872âBurden of Proof (Section 107 & 108)
1. Â Â  Indian Evidence ActÂ was enacted on 15th March 1872 and came into force on 1st September 1872. This act was alsoÂ appliedÂ in Pakistan until 1984. It contains a setÂ of rules and allied issues governing the admissibility of evidence in the Indian Court of Law.Â

2. Â Â  Burden of ProofÂ is covered underÂ Sections 101â114 of the Indian Evidence Act, but the term Burden of Proof has not been defined in the Act. It has two distinct meanings;Â

1.Â  The BurdenÂ of ProofÂ as a matter of Law and Pleading: According to this definition, the party providing facts during pleading has the burden to prove the facts.

2.Â  The BurdenÂ of ProofÂ as a matter of Adducing Evidence According to this, it is the burden of the party to prove their facts to adduce evidence.

3. Â Â  Section 101 of the Indian Evidence ActÂ states that theÂ burden of proof is on the party who is saying.Â

5. Â Â Â  Section 107 of the Indian Evidence ActÂ states the burden of proving the death of a person known to have been alive within 30 years. If a person is known to be alive for 30 years but if any other person contradicts and says that the concerned person has died then the burden of proving the death of the concerned person is on the person claiming that the person had died.Â

6. Â Â  To prove the death of aÂ personÂ known to be alive for 30 years, it is mandatory to prove when he died, which day he died and how he died.Â

9. Â Â  Court considers a person dead ifÂ he is been missing for 7 years or more and until it is proved in the court of law that the concerned is alive, the court will consider the missing person dead.Â

10. Â Â  Section 107 and section 108 of the Indian Evidence ActÂ deals with the burden of proving the death of a personÂ known to have been alive for 30 years and proving a person is alive who is missing since 7 years, respectively.