Is Phone-Tapping Legal In India? 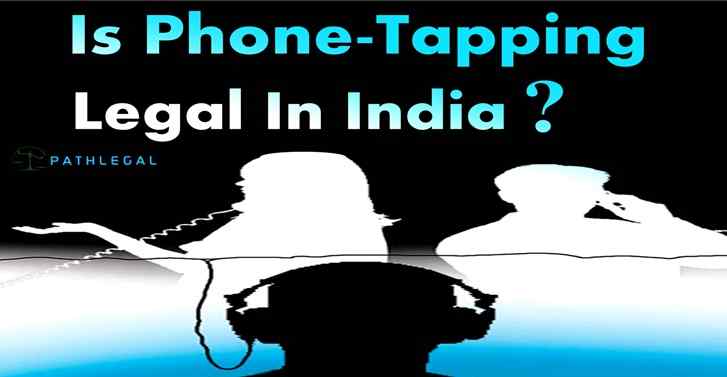 Phone âtapping or eavesdropping of phone calls is where the telephonic conversations of an individual are recorded secretly so as to gain information legally or illegally about what is being conversed over a phone call. The tapping of phone calls can be done when authorized in matter of security. But when it is other way then the privacy of the individual is intruded.

Advanced technology has made phone-tapping easier with the ease of availability of software and smartphones and can be used unauthorized manner on other individuals for personal acquisition of the details of the individual without his /her knowledge.

It is legal when it is done by the Government and authorities for security reasons. Tapping phones legally would be done in a room reserved strictly for officials designated and the room can be entered only on the use of biometrics by that official. The room consists of equipment and gadgets customized and set up.

There are devices to track the calls of the person while he is on the run and can be used to track down escaped convicts, wanted convicts and terrorists. This is usually monitored in a vehicle equipped with appropriate gadgets and is available to anyone.

Nowadays, bugs are used to record conversations or eavesdrop. It can be accessed by anyone and can be planted with the help of a technician. Usually, telephone employees help police and law enforcement agencies to plant bugs. Bugs can record conversations in the room of the individual intended to be eavesdropped or record his or her phone calls.

There are also applications on smartphones to record an ongoing call without the knowledge of the person on the other side of the phone call which can record a specific call or all calls. Such recordings can be misused by the person for monetary gain or benefitted in some way or other.

Customer care of many firms or organizations record of unaware customers which is a routine or automated Interactive Voice Response or IVR when abbreviated. This is not an option for customers who usually do not prefer calls to be recorded.

(a) willfully secrets, makes away with or alters any message which he has received for transmission or delivery, or

(b) willfully, and otherwise than in obedience to an order of the Central Government or of a State Government, or of an officer specially authorized by the Central or a State Government to make the order, omits to transmit or intercepts or detains, any message or any part thereof, or otherwise than in pursuance of his official duty or in obedience to the direction of a competent court, disclose the contents or any part of the contents of any message, to any person not entitled to receive the same, or

(c) divulges the purport of any telegraphic signal to any person not entitled to become acquainted with the same, he shall be punished with imprisonment for a term which may extend to three years or with fine, or with both.â

2. Section 5(2) of The Indian Telegraph Act,1885, the right to tap phone calls is given to Central Government and State Government when cases are investigated during which phone calls of persons who are under suspicion or under surveillance are tapped or recorded.

3. Section 7(2)(b) of the Telegraph Act,1971 empowers the Government to make rules to provide precautions to prevent unauthorized tapping or disclosing of the messages.

4. Amendment of Section 5(2) of the Telegraph Act,1971 included the tapping of phone calls with regard to incitement of offences.

5. Entry 31 of the Union List of the Constitution of India stresses on telephones along with other communication devices.

6. The right to privacy is included in the right to life under Article 21 of the Constitution of India.

7. Article 17 of the International Covenant on Civil and Political Rights (ICCPR)Â  to which India is also a part, deals with the right to privacy.

8. Freedom of speech and expression given under Article 19(1)(a) is violated when the phone call of the person is tapped with few exceptions.

What Are The Solutions For The Aggrieved Party?

1. The aggrieved party can complain to the National Human Rights Commission if his or her phone is tapped in an unauthorized manner.

2. FIR can be filed by the aggrieved party if his or her phone is tapped illegally.

3. Section 26(b) of the Telegraph Act provides an aggrieved party to take recourse legally through the court if his or her phone is tapped or eavesdropped without permission or done unauthorized.

Advancement of technology when not used properly and done illegally, then the right to privacy of the common man is in danger. For further details, contact Lawyers in India.