Is There Any Disadvantage If Petition For Divorce Is Filed By Husband First? 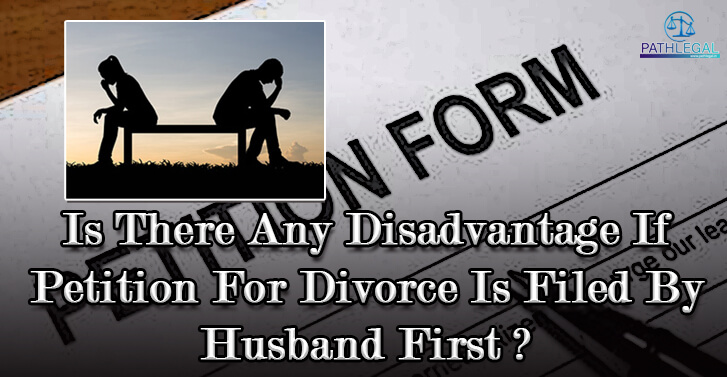 When either of the spouse in a marriage suffers either mental or physical torture or both and unable to stay in the unhappy marriage anymore, then the spouse can file a petition for divorce irrespective of the fact that the spouse is filing for divorce first.

It need not be true that if a husband files for divorce then he has to give more alimony to his wife since payment of maintenance /alimony is not dependent on who files for divorce first. Maintenance matter comes up when a spouse files for it and then the court decides based on the income earned by other spouse.

âIn that case, Bhagwati J. as he then was, referred to the following observations of Denning L J in Sydenham v. Sydenham and Illirigworth, (1949) 2 All ER 196-

"There is nothing in the statute to say that a wife against whom a decree has been made cannot be awarded maintenance, and there is nothing in it about a.discretion being exercised in favour of one side or the other or about a compassionate allowance. All it says that on a decree of divorce the court may award maintenance to the wife. This includes a guilty wife as well as an innocent one. but in awarding maintenance the court must have regard of course to the conduct of the parties.,J The learned Judge also refers to the observations of Hudson L. J. in Clear v. Clear, (19581 2 All ER 353 wherein a difference has been made to a common law right to get maintenance and the right to get maintenance arising by virtue of divorce legislation, and that even it the wife has forfeited her right to get maintenance under the common law. she is entitled to get maintenance under a provision of the divorce legislation. After making reference to the above observations of Denning L. J. and Hudson L. J. it was pointed out in the Gujarat case that u/s. 25, a permanent alimonv can be granted to even an erring spouse and that the fact that the wife was the guilty spouse can only be taken as a relevant factor in assessing the conduct of the parties and in determining the amount of permanent alimony. In view 'of the said decision, the contention of the learned counsel for the appellant that application for Permanent alimonv and maintenance by an erring wife cannot be maintained u/s. 25 Iona after the decree of divorce had been passed against her, cannot be accepted.ââ Lawyers in India can give more information about this.