It Is High Time Now To Scrutinize The Role Of The Judges For Pendency Of Cases In Huge Number... 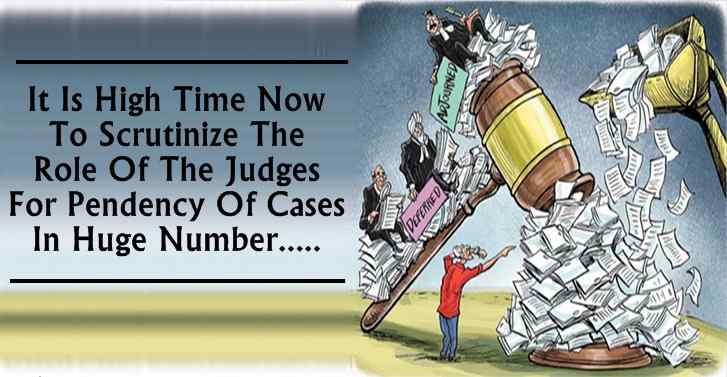 It is high time now to scrutinize the role of the Judges for the pendency of cases in huge numbers...

The litigants are losing faith in the justice system day by day in the absence of any practically possible mechanism to redress their grievance against corrupt judges.

Victims failing to get justice from the corrupt system, do suffer from stress-related diseases. Victims who have lost faith in the Justice Delivery system, are forced to take some sort of retaliatory measures to get justice. One crime, is, therefore, followed by another as it used to be in the Primitive Society.

Dishonest police and corrupt judicial officers are, therefore, more terrific and dangerous than the disappointed victims who are forced to take laws in their hands for obtaining justice. The corrupt judges who are causing distrust in the minds of the litigants and force them to commit crimes in retaliation are supposed to be prosecuted as if they have abetted the said crimes so as to remind the corrupt judges that the crime never pays.

Preamble of our constitution guarantees to a citizen justice, liberty, equality and fraternity. All these are possible only when there is rule of law. Where the rule of law is strong, the People uphold the law because they have a stake in its effectiveness. However, the Rule of law has now been diluted by the executives of the State in such a way that the victims are further victimized even by the judiciary on some or the other technical grounds.

It has been pointed out by the honâble Bombay High court that it is not only the obligation of the State administration, but also of the Courts to ensure that a fair and effective criminal justice system is in place and is implemented. Sometimes, two different judgments (!) are delivered in one case falling under the same law. If one judgment is right, the other one becomes wrong. But, why are the litigants required to spend so much amount of money for the appeal, to rectify the mistakes done by the previous judges in a very careless manner?

Why are the litigants required to wait for so many years to get justice when the previous judges have failed to perform their duty by applying their mind and law while deciding the cases?

Is it practically possible for a litigant to prove that his case was decided by a corrupt judge for an extraneous consideration and that he / she misinterpreted the law intentionally according to his / her convenience?

The judges do enjoy some privilege and immunity. However, the same should be meant for exercising their powers and performing their corresponding duties in the interest of the justice not for taking away the chances of the litigants to get justice in a legally permissible manner.

Millions of cases in the Indian courts of law have been pending for more than 10 years. Some Judges, instead of removing cause of action, do create new causes of action for future litigation. It is, therefore, high time now to scrutinize the role of the judges for long pendency of the cases and to fix the liability on the errant judges for passing wrong orders in a very careless manner so that the judges will be restrained from passing wrong judgments for an extraneous consideration.