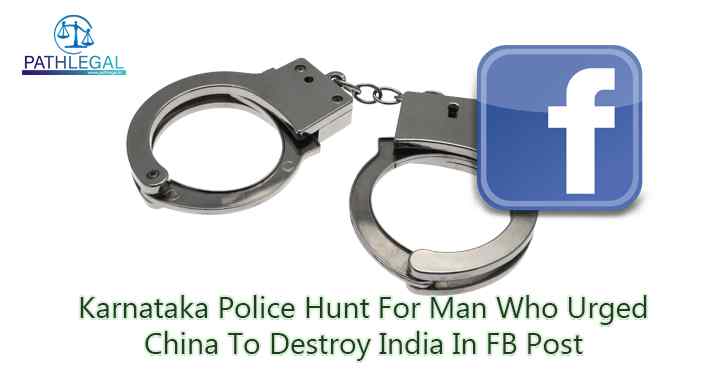 The Karnataka police on Thursday registered an FIR against a 27-year-old man from Gadag who in a Facebook post urged China to destroy India.

The social media post in Kannada came amid a countrywide outrage and anger at the killing of 20 Indian soldiers in a clash with Chinese troops in Ladakhâs Galwan valley on Monday.

G Basvraj is a native of Munavalli village in Belgaum district has been working in a mobile phone repair shop in Rona taluk of Gadag district for more than four years, and also praised China in the post.

The FB post calling for Indiaâs destruction has enraged many people and the police have suo motu registered a complaint.

Speaking to HT, Rona police station Sub Inspector Vinod Pujari said âAn FIR has been registered under IPC sections 153 and section 505. He has been absconding ever since a backlash against his post. The owners of the mobile shop where he works say that they have no idea why he may have done this. We are on the lookout to detain him and will thoroughly investigate the matter.â

Section 153 of the IPC deals with incidents of wantonly giving provocation with intent to cause riot and carries a jail term of up to a year.

Section 505 deals with intent to cause, or which is likely to cause, fear or alarm to the public, or to any section of the public whereby any person may be induced to commit an offence against the State or against the public tranquility. The crime is punishable with imprisonment of up to three years.

Efforts to reach Basvraj for his version of the events on the phone number displayed with his profile proved unsuccessful.