LIVE: SC to examine legal challenge to abrogation of Article 370 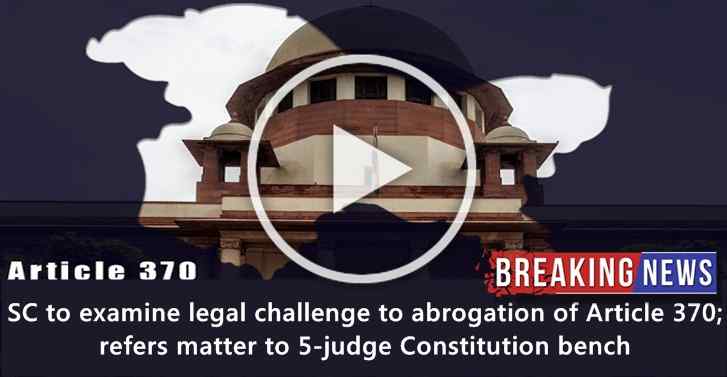 The Supreme Court of India (SC) on August 28 referred petitions challenging constitutional validity of abrogation of special status of Jammu and Kashmir (J&K) and bifurcation of the state into two Union Territories (UTs), to the Constitution bench.

The petitions will be heard by a five-judge Constitutional bench in the first week of October.

The apex court will review the constitutional validity of the governmentâs move to abrogate provisions of Article 370 that gave special status to J&K. The court was hearing pleas against the decision.

A bench headed by Chief Justice of India (CJI) Ranjan Gogoi was not in agreement with the Centre that there was no need for issuance of notice in the matter as Attorney General KK Venugopal and Solicitor General were marking their presence in the court.

The Attorney General said whatever being said by this court had been sent before the United Nations.

As the counsel appearing for both sides were involved in arguments and counter-arguments, the bench said, "We know what to do, we have passed the order. We are not going to change".

The top court also issued a notice to the Centre on the issue of restrictions imposed on media in Jammu and Kashmir. The court has asked the government to respond within a week.

This was based on the plea by Kashmir Times Executive Editor Anuradha Bhasin who had sought a direction for relaxing restrictions on the internet, landline and other communication channels.