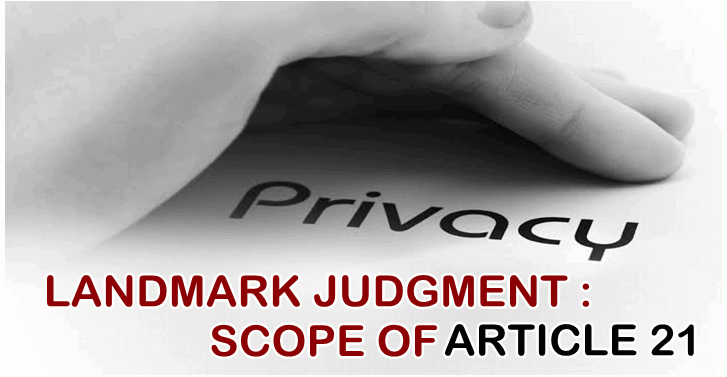 The Supreme Court in Satwant SinghÂ held that right to travel abroad is well within the ambit of Article 21. Therefore, to combat the above laid down law the Parliament enacted Passports Act 1967. Passport Act, 1967 empowers the authorities to impound the passport of certain individual if such action is necessary in the interest of sovereignty and integrity of India, the security of India, friendly relations of India with any foreign country, or general public. The reasons of such impoundment are also to be communicated the affected party however in the interests of the general public these reasons can be withheld.In the immediate case the authorities on July 4th,Â 1977 issued a notice of impoundment of the passport of Petitioner who was a known journalist citing reasons as in the interest of general public. As soon as the petitioner got the notice of such impound she reverted back to the authorities asking for specific detailed reasons as to why her passport shall be impounded. The authorities however, answered that the reasons are not to be specified in the interest of the general public. Therefore, the petitioner approached Supreme Court u/a 32 for the enforcement of Fundamental Right mentioned u/a 14 against the arbitrary action of the authorities. The petition was further amended and enforcement of Article 21 i.e. Protection of Life & Personal Liberty, Article 19(1)(a) i.e. Right to freedom of speech & Article 19(1)(g) i.e. Right to freedom of Movement.Among the major reasons contended for the filing of such petition, the petitioner contended that the impugned order is void as it took away the petitionerâs right to be given a fair hearing to present her defense.

This case directly brought into question the legality and validity ofÂ A.K. Gopalan v. State of Madras.Â In that case it was argued by the petitioner whether the validity of any law shall be decided by the fact that it is a procedure established by law or the law along with being established by law shall also conform to principles of natural justice. The main debate was around the scope of the wordÂ âprocedure established by lawâÂ on the point that can such procedure be arbitrary or unreasonable or should it always be just, reasonable and fair. The majority bench however rejecting all the arguments of the petitioner held that the wordÂ lawÂ u/a 21 doesnât necessarily be in conformity with the principles of natural justice. But it was Justice Fazal Aliâs opinion in the case that paved the way for a liberal approach of the interpretation of Art. 21. Justice Fazal Ali dissented with the majority by holding that the right to life u/a 21 does constitute Principles of Natural Justice and the courts should check that any procedure established by law do not suffer with the problem of unreasonableness & arbitrariness. The spirit of Justice Fazal Aliâs argument was that the procedure should be just, fair and reasonable.The court inÂ Maneka GandhiÂ adopted the dissenting view of Justice Fazal Ali inÂ A.K. Gopalan v. State of Madras.Â Therefore, the court held that the while the procedure established by law should be reasonable, just and fair it shall be free from any unreasonableness and arbitrariness.Read moreÂ legal judgmentÂ in India