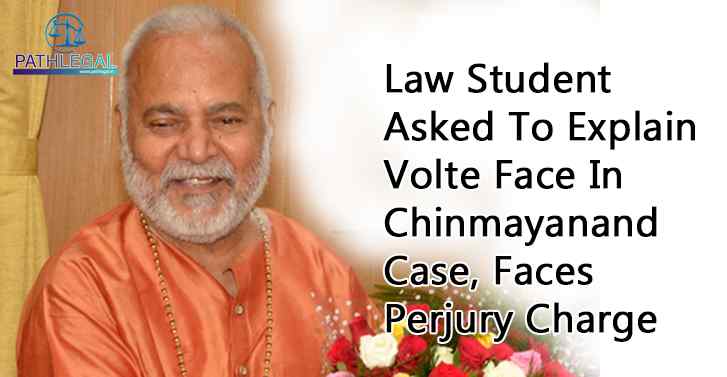 The woman law student, who disowned her allegation of sexual harassment levelled against former union minister Chinmayanand before a special MP/MLA court in Lucknow on Tuesday, could face charges for perjury.

Deposing before the court of special judge Pawan Kumar Rai through her lawyer, the law student denied having ever accused Chinmayanand of sexual harassment, making prosecution move an application seeking action against her for perjury or lying before the court.

The prosecutionâs application for proceedings of perjury, after the law studentâs turnaround in court, has been moved under Section 340 of the CrPC.

Special judge Rai ordered the law student to file her reply by October 15, the next date of hearing.

The sexual harassment case came to light in August last year when the woman, who was studying law, went missing from Shahjahanpur in Uttar Pradesh. Later, she released videos alleging rape and sexual harassment by the former union minister.

The former union minister is the president of the managing committee of Swami Shukdevanand post-graduate college, Shahjahanpur, where the woman studied law.

The state government formed a special investigation team (SIT) to investigate the matter.

The SIT lodged an FIR against the former minister under Section 376-C of the IPC, an offence pertaining to the abuse of oneâs position by a person in authority to âinduce or seduceâ a woman under his charge to have âsexual intercourse not amounting to the offence of rape.â

The SIT also implicated the law student for extortion.

Chinmayanand and the law student were arrested and sent to jail in September last year.

In February this year, the Allahabad high court granted bail to Chinmayanand, whose trust runs the Shahjahanpur Law College. The woman also secured bail and is currently out of jail.