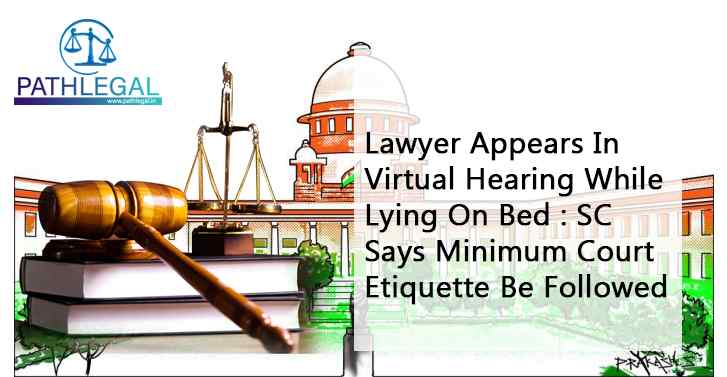 A lawyer appeared in aÂ virtual hearingÂ in the Supreme Court while lying onÂ bedÂ and donning a T-shirt, drawing displeasure of the judge who observed that "minimum court etiquette" should be followed given the public nature of hearings. The apex court observed that lawyers appearing in matters viaÂ video- conferencingÂ should be "presentable" and avoid showing images which are not appropriate.

Justice S Ravindra Bhat accepted the apology tendered by the advocate, who said it was "inappropriate on his part to make a court appearance, whilst lying on bed dressed in a T-shirt".

"This court is of the view that when counsel appear inÂ court video hearings, they should be presentable and avoid showing images, which are not appropriate and can only be tolerable in the privacy of their homes," the court noted in its June 15 order.

"We are all passing through trying times and hearings by virtual courts has become an order of the day. Yet minimum court etiquette in terms of what can be considered decent dress, background, etc should be followed, given the public nature of the hearings," the apex court said.

The incident had happened when the top court was hearing a petition seeking transfer of a case pending in a family court in Haryana's Rewari to a competent court inÂ Bihar'sÂ Jehanabad.

The apex court, which has restricted its functioning amid the Covid-19 pandemic, is presently hearing matters through video-conferencing.

In April this year, a similar incident had come to light when a lawyer had appeared in a bail hearing conducted through video-conferencing in vest, drawing the ire ofÂ the Rajasthan High Court.

The high court had criticised the advocate for not appearing in proper uniform during the hearing.