Lawyer-Police Clash: Hidden Facts Behind The Issue You Didn't Know 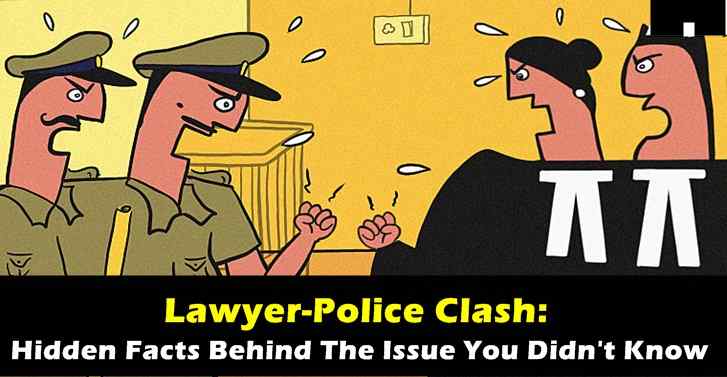 The fight between lawyers and police are going on for decades and there is no end to it. The legal profession is already under attack by those who want anarchy, chaos or dictatorship. The questions that have been asked all over India: âWho guards the guardians?â Is lawyers in India above the law, licensed to make their own law? The law professionals are under attack from the time entering into law schools to the reach of Supreme Court.

The recent fight just started over a parking issue. An office-bearer of the Tis Hazari Bar Association said a police vehicle hit a lawyer's vehicle when he was coming to the court. "When the lawyer confronted them, he was ridiculed and six police personnel carried him inside and thrashed him. People saw this and called the police. Â The lawyers are protesting against the officers who shot the lawyer in Delhiâ. The preliminary defence offered by either side indicates that both may be equally guilty of taking the law into their hands. If it was the common citizens at one end than what would have happened? If the lawyers and police themselves do not follow the law, there would not be any hope for the common citizen from the legal system.

Both the police and lawyer have caused shame to theÂ entire legal system. The question of trust is two different extents. First, trust in the ability of a person. Secondly, trust in the character of a person. Courts depend on public trust to effectually discharge their functions. As such, courts do not have the independent power to compel the audience of their decisions.

The government and the public expect Judiciary to uphold the law, it is a big responsibility. If police pointlessly beat up someone, lawyers are there to plea for justice but if police and lawyer are beating each other than where the justice is and what is the need of judiciary. The current situation is that Lawyers are looking for police protection from the police. And police are looking for good lawyers to fight their case against the lawyers.