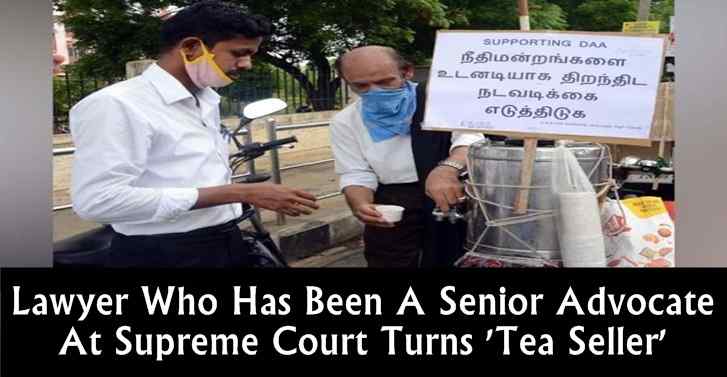 ERODE: From the busy life of a lawyer in the Madras high court and the Supreme Court to riding a ramshackle bicycle selling tea to make ends meet, 69-year-old S A Syed Haroon has seen it all. The senior advocate took to selling tea in May, two months into the lockdown, when he received a message from his bank reminding him that the minimum balance in his account had dipped below the permissible level.

âWhen I got the message from the bank, I decided to do something of my own to run my family,â he said. Syed Haroon, a senior advocate in the Supreme Court between 1996-1999 and the Madras high court since 2000, was born in Coonoor in Nilgiris in 1951. He later moved toÂ ErodeÂ in 1967 when his father, a railway employee, got transferred. After completing his schooling in Erode, he signed up to study law at Government Law College in Chennai in 1974. â

After completing law in 1979, I joined the Congress party and appeared for many leaders in the Supreme Court between 1996 and 1999,â he told TOI. Since 2000, he has been practicing as an advocate in the Madras high court. The lawyer said he used to earn about ?60,000 a month through his practice. âI have two daughters and a son, and have spent all my earnings on them,â he said. With the lockdown came a new set of miseries. On March 24, Syed Haroon came back to Erode to live with his family. Though heâs nearing 70, he wanted to be on his own financially. âI am a senior advocate, but I donât have any savings, and I felt disconsolate when I received the SMS from the bank,â he said.

To make ends meet, Syed sold vegetables in his locality, but got a lukewarm response. It was then that the idea to sell tea crossed his mind. âInstead of setting up a tea stall, I wanted to sell it on my bike,â he said. His new business earns him ?500 a day, but fuel expenses proved a drag. âI flipped away my bike, and looked forward to selling tea on my old bicycle...itâs both cost effective and good for my health,â Syed Haroon said.