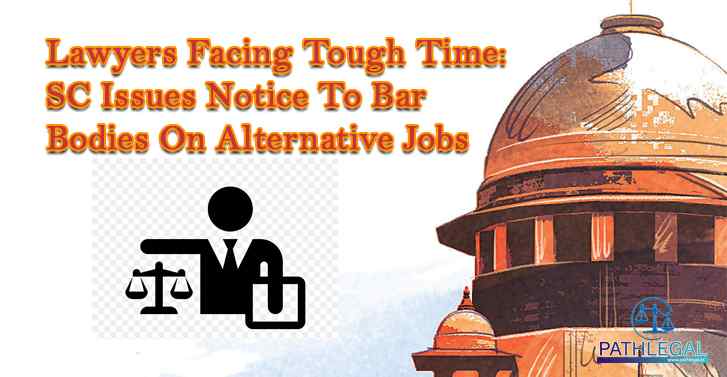 As thousands of advocates across India face tough time due to COVID-19 crisis, the Supreme Court on Wednesday issued notices to all recognised Bar bodies to explore options to ameliorate their condition.

A Bench headed by Chief Justice of India SA Bobde, which took suo motu cognisance of the issue, asked BCI, state Bar councils and all recognised Bar associations in the Supreme Court and high courts to spell out their stand as to allowing advocates to engage in alternative jobs.

The Bench wanted to know why a fund can't be created for disbursal of money to eligible lawyers. Bar bodies have been asked to respond as why they can't receive donations from members of the Bar other legitimate institutions to help needy lawyers.

The matter will be taken up for hearing after two weeks.

Currently, advocates are not allowed to be on payroll of any employer and those indulging in such activities face action for violating professional ethics.

Earlier, Bar Council of India -- which regulates the legal profession in the country -- and other Bar bodies had raised the issue of dwindling sources of income of lawyers due to COVID19 lockdown and restricted functioning of courts across India.

On July 14, the top court had issued notice to BCI on a PIL seeking a direction to BCI to allow them to advertise to get work and to take up other assignments to survive during COVID19 crisis asking it to respond in two weeks.

As common lawyers find it difficult to earn a decent living during COVID19 pandemic, a PIL had sought a direction to BCI to allow them to advertise to get work and to take up other assignments to survive.

Filed by advocate Chanderjeet Chanderpal, the petition requested the top court to direct BCI to relax rules of professional conduct that debarred advocates from advertising.

Advocates should be allowed to be employed at companies on monthly retainers and earn a livelihood through other sources in these trying times, submitted Chanderpal.

"Advocates are dying, landing in depression, are not having money for medical expenses for their dependents etc, there are also reports of suicides and this has happened due to closure of Courts and other legal activities as a result of COVID-19 lockdown," the petition submitted.

The PIL had sought a direction to BCI to amend its Rules to allow advocates to get employed as legal advisors on a retainer basis and permit them to advertise through limited and specific sources to solicit chamber work with an undertaking that it shall not continue beyond March 2021.