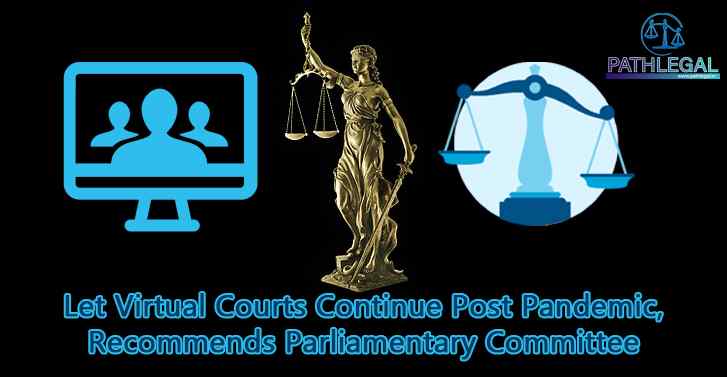 A parliamentary panel has recommended continuation of virtual courts in certain categories of cases like appeals and final hearings with the consent of the parties involved even after the Covid-19 pandemic, saying it will pave way for cheaper and faster means of delivery of justice as a court is more a service than a place.

It has suggested permanent virtual proceedings for appellate tribunals like Telecom Dispute Settlement Appellate Tribunal, Intellectual Property Appellate Tribunal, National Company Law Appellate Tribunal, etc. âThis will cut down the cost and increase the efficiency in disposal of the cases without being unnecessarily being adjourned. Virtual courts can deliver faster results with fewer resources. They can also reduce commute time to courts and waiting time at the courts,â the Parliamentary Standing Committee on Personnel, Public Grievances, Law and Justice said in an interim report submitted to Rajya Sabha chairperson M Venkaiah Naidu on Friday.

The report underlined digital justice is âcheaper and fasterâ. The panel added it addresses locational and economic handicaps, ensures the safety of vulnerable witnesses providing testimony besides expediting processes and procedures.

The Bharatiya Janata Party lawmaker Bhupender Yadav-led panel said virtual courts are an improvement over traditional ones âas they are most affordable, citizen-friendly and offer greater access to justiceâ.

Court proceedings have been held digitally for over five months to adhere to social distancing norms as part of the measures to check the spread of the pandemic. The Supreme Court late last month notified standard operating procedures (SOPs) to govern physical court hearings which were expected to commence soon. The physical hearings of matters are expected to initially begin only in three courtrooms, the SOPs said. The court was expected to take a call on how many lawyers and litigants will be permitted inside the courtroom, depending on the capacity and physical distancing norms.

Physical hearings of cases in the Supreme Court were suspended on March 23 in view of the pandemic. The apex court has been hearing cases via video conferencing since then. The top court issued a circular on March 23 suspending entry of lawyers and litigants to the court premises and directing that only urgent cases will be taken up for hearing through video conferencing.

The panelâs recommendations have come even as various Bar councils have questioned the efficacy of the digital proceedings and pointed out the limitations of the infrastructure required for them. They have said digital proceedings favour tech-savvy advocates besides depriving opportunities to many lawyers to change the course of arguments based on the changing dynamics of a case during hearings.

In their submissions to the panel, the councils said over 50% of advocates, mostly at the district and lower levels, do not own laptops or computers and lack the skills required for virtual proceedings.

The report maintained virtual courts and hearing cases through video conferencing have gained immense ground during the pandemic and will remain a new reality and new normal. It added virtual courts will promote access to justice since litigants in remote areas will be able to access the Supreme Court without spending money on travel to Delhi. âLitigants need not leave their work to attend court as they can access proceedings from their home or office. It facilitates a lawyer to argue in any court in India. A lawyer can argue in one court in the morning and be present in another court later in the day. It thereby creates a level playing field between the affluent and less well off.â

The panel has suggested necessary amendments to the law to give legal validity to virtual courts and their proceedings so that they are not questioned before courts.

As many as 13 out of the 25 high courts in the country have introduced and enabled electronic filing of cases. But the district and subordinate courts at many places have been lagging behind due to lack of infrastructure and experience in handling and transitioning to virtual hearings.

The committee acknowledged the difficulties in the report and said massive investments would be required to put in place the infrastructure necessary to support the digitised hearings. It has suggested the feasibility of new financing approaches like the public-private partnership model for the purpose.

The committee said the transfer of certain categories of cases from regular to virtual courts will reduce the pendency of cases. â[The] Committee feels that the present system should be allowed to continue on an experimental basis with the consent of all parties for certain categories of cases like Appeals etc and final hearings where the physical presence of the parties/counsels is not required and online virtual hearing alone is sufficient. The expenditure involved in the establishment of a large number of Tribunals /Courts can be cut down sizeably. This will also reduce the crowd in the court and cut down other litigation costs and overheads,â the report said.

The report said that virtual courts will make court services accessible to all. âNo member of the general public should be disadvantaged by locational or economic handicaps or otherwise. The Committee is of the opinion that Digital Justice is cheaper and faster. People living in remote and far-flung areas can also take part in Court proceedings.â

The committee said one of the principal benefits of virtual courts will be that they will expedite processes and procedures which would otherwise be protracted and laborious. âVirtual Courts can deliver results faster and with fewer resources. Virtual Courts help in concise, pointed, and focused arguing by lawyers making the system faster,â the report said.

The panel said there is no mechanism currently to segregate simple cases from complex ones involving cumbersome procedures and multiple witnesses. âThe principle of Proportionate Justice requires that the expense, speed, complexity, and the extent of combativeness of any case should be proportionate to the substance and scale of that case. Petty cases should be dealt with swiftly in a reasonable timeframe. Such cases should not require cumbersome procedures.â

Virtual courts, the report said, can address this issue. The committee concluded that physical courts alone will not be sufficient. It added virtual courts will have to be integrated into the countryâs legal ecosystem. As a first step towards this, the judiciary should identify cases that can be heard by virtual courts, it suggested.

âThe Committee is of the view that all such matters where personal presence may be dispensed with can be transferred from regular Court establishments to Virtual Courts. ...Virtual adjudication will bring massive benefits across the system,â the committee said.

It also recommended extending virtual courts to cover arbitration hearings. âFor instance, if national and international arbitrations are allowed to be conducted through Virtual Courts, there will be hardly any requirement for real-time travel to distant locations. ...this move will unlock the Courts and also mitigate the inconvenience of attending Courts as long-distance travel can be dispensed with and proceedings become less expensive as well.â

The other recommendations include setting up of E-Sewa Kendras at all court complexes, speedy execution of National Broadband Mission, the introduction of computer courses for law students, and developing an indigenous software platform to ensure data privacy and safety. The panel has also suggested providing a Wide Area Network facility, adoption of machine learning, artificial intelligence, etc for a transformational change in the dispensation of justice.

âThe Committee believes that âJustice delayed is Justice deniedâ but âJustice hurried is also Justice buriedâ. The Committee is of the view that Virtual Courts is a mechanism that will strike a balance between these two extremes and extend expeditious Justice to the litigant public without compromising quality. The Committee feels that transfer of certain categories of cases from regular Court establishments to Virtual Courts will reduce the pendency of cases which has been clogging the wheels of Justice for decades,â the report said.

Yadav referred to virtual courts in countries like the US and Singapore and said they have also done a lot of work on aspects like the conduct of remand matters virtually to prevent the movement of prisoners between courts and jails. âWe have effectively used virtual courts during the lockdown period wherein more than 1.8 million cases were registered across the country, of which nearly 800,000 have been disposed of.â