MARRIAGE HALL CONTRACTS:Legal Status Of Both Parties In The Light Of COVID-19 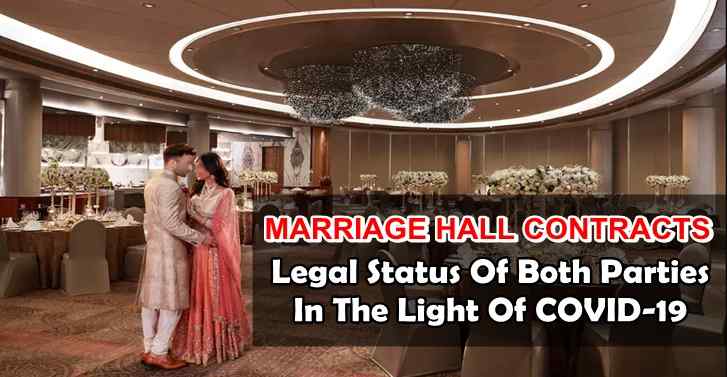 It is quite true that the COVID 19 pandemic has devastated the normal pace of life. There have been many businesses which were affected, and one such business contract which has been commonly entered into by many persons is the booking of marriage halls.

Marriages are conducted in great pomp and splendor in India. The general Indian notion is that a marriage is a once-in-a-lifetime event and worth spending a lot of money. Marriage halls are booked well in advance, and in most cases, the rent for the marriage halls is paid much early, even six months before the marriage. Such contracts for the letting out of the marriage halls get frustrated because of the Government imposed regulations of the conduct of such functions.

Let us delve into the legal position. An agreement to do an impossible act is declared void under sec. 56 of the Indian Contract Act. More importantly, an agreement to do an act which has become impossible after the contract is made, due to some event which the promisor could not prevent, becomes void. The contract is valid on the inception, but it becomes void due to the reason, the agreement cannot be performed.

Reference must be made an old English case Taylor v. CaldwellÂ [2]In this case, agreement was in relation to the let out of a music hall on certain dates. However, the said music hall caught fire before the first date of the concert, due to fault of neither parties. The plaintiff sued the defendant for the losses. The Bench opined that the contract was not absolute, and subject to an implied condition that the parties shall be excused in case, before breach, the contract becomes impossible without the performance of the contractor.

Now, there is a clash of two contentions. The contractees claim the principle of absolute liability in relation to the sanctity of the contract. The contractors raise take shelter of the principle that the shared contractual assumption that has been destroyed under the circumstances. The court will take into consideration as to whether any untoward event supervenes the performance of the contract.

Beyond all these, it must be remembered that law is dependant on social dynamics. These legal principles may not alter the general mindset of the parties. The return of the amount is inevitable, but a recovery suit for the same is unthinkable, given the general prevalence of a notion that civil suits take a long time to get adjudicated. The marriage halls are in a dominant position and the contractees are in a subservient position, owing to the fact that the payment has been made already.

Nevertheless, all the above circumstances are based on contracts read in isolation. If a marriage hall refuses to refund the advance paid, the said refusal must subsist for a number of such contracts, considering the fact the pandemic has been in existence for months together. So, when he is put to defend a number of lawsuits together, it would be catastrophic for him, if not placing him in a situation of formulating a common method of settlement. If he does not treat the contractees with parity, he is put to greater civil liability under the common law remedy for his ulterior discrimination. Thus, there is no incidence of unjust enrichment.

This is one understanding of how the object of law is upheld at all times by social action. The victims who impose faith in the remedy and recourse available are never left unprotected.Â