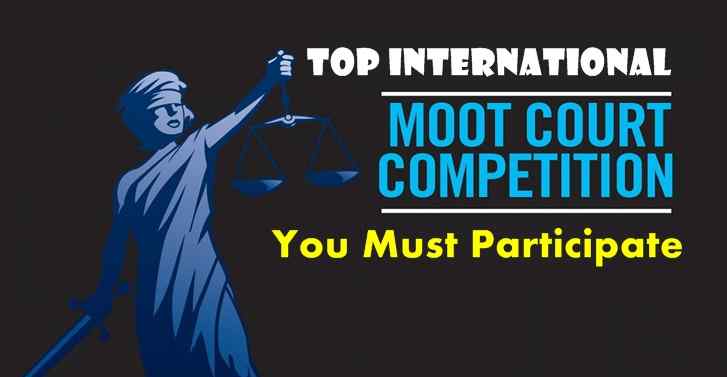 Surana and Surana International Advocates group has been conducting the Stetson, India National rounds for more than two decades now. Counting for more than 20 years and still going on, students have never missed participating in any edition of the respected and reputed Stetson moot.

Students coming from all over the world have been participating and competing with a fiery enthusiasm to take the prestigious trophy with them.

A group of students from Gujarat National Law University have won the recent and 21st edition of the moot held on the issue of climate geoengineering and its impact on oceans.

The competition is held in the later months every year with different environmental issues being addressed through the moot.Moot Court Competitions are also conducted by top law firms in India.

First, teams would have to participate in a regional round and then after qualifying the regional round they would get a chance to compete in the world rounds.

The following awards can be won by a team, notably, the Champions Trophy, runners-up trophy, semifinalists, three best memorialâs, five best oralists in the Preliminary Rounds and the best oralist in the final world rounds.

The Price Media Law Moot Court Programme was established by the programme in âComparative Media Law & Policyâ at the Oxford University in 2008.

The moot specifically has the noble aim of fostering and cultivating an interest in the right to freedom of expression and the increasing responsibility of media and information technology around the world.

The annually held Moot Court Competition encourages students to engage in constructive research of legal precedents and to construct their arguments on the latest and unanswered fields of media and ICT law.

The Price Media Law Moot Court Programme is much more huge than a moot court, itâs an experience.

Each team may comprise of minimum 2 members and maximum 6 members, along with one coach.

The glorious 9th Nelson Mandela World Human Rights Moot Court Competition is into its 9th Year now with its 9th Edition being held this year from 18th to 21st July 2017 at Â Palais des Nations in Geneva, Switzerland.

Both undergraduate and masterâs degree law students are eligible to take part in the competition. A team comprising of two students representing each university are invited to participate in the event.

However, the organisers prefer it that the team should be composed of a man and one woman, to promote gender equality and womenâs rights.

In the preliminary rounds, the students submit heads of argument for a hypothetical case, which are assessed by a panel of experts. The best 5 teams from each UN region are then invited to participate in the pre-final and final rounds of the Competition in Geneva. Here, teams have to argue the two sides of the hypothetical case, the Applicant and the Respondent, before a âbenchâ of human rights experts. The two best teams proceed to the final round, which is presided over by judges from international courts and tribunals.

The Philip C. Jessup International Law Moot Court Competition, or more popularly known as the Jessup is supposed to be the largest, oldest and most prestigious moot around the world.

Students from around 700 universities from 90 countries have participated in the reputed moot. A lot of universities and international organisations also define moot in the same way.

This moot is a realistic simulation of an imaginary dispute between nations, which then plead before the International Court of Justice.

The competition is named after the famous Philip Jessup, who once served on the ICJ panel. The International Law Students Association is responsible for organising the said competition.

It originally started as a friendly mooting competition between two teams from Harvard University in 1960. It started under the leadership of Stephen Schwebel, the author of the inaugural moot problem.

In 1963, the first championship trophy was given away in 1963 and the doors of the competition were opened to international teams only in 1963.

The reputed Henry Durant Human Rights national level moot is conducted every year by Indian Society of International Law and International Committee of the Red Cross in the memory of ICRCâs founder Henry Durant.

Indian Society for International Law was founded in 1859 and was also inaugurated in the same year. It was founded by Pundit Jawaharlal Nehru.

ICRC and ISIL have been collaborating successfully to conduct the Henry Durant Memorial Moot Court Competition, every year.

The organisation offers a running trophy to the winning team along with medals to each winning participant.

The principal objectives behind organising the moot court competition are to raise awareness relating to international humanitarian issues among law students and to increase knowledge and application of International Humanitarian Law.

Each team shall consist of two mooters, one researcher and a faculty coach if it shall be possible to be one.

The Manfred Lachs Space Law Moot Court Competition was started by the International Institute of Space Law in 1992.

It covers a total of four world regions, namely, North America, Europe, Asia-Pacific and Africa. Participation amounts to more than 60 teams in a year.

The teams that successfully register get exclusive and free access to papers of the IISLâs colloquium proceedings from 2005.

The regional winners out of the four world regions receive monetary support from IISL to attend the world finals.

âThis moot finds its place along with other internationally acclaimed moots as it has a tradition of placing the Judges of the International Court of Justice in the bench presiding over the world finals.â

The World Finals competition is conducted within the structure of the IISLâs annual Colloquium, which is an exclusive event in the International Astronautical Congress and is held on a different continent annually. This particular moot offers an uncontested Educational experience to all teams at all rounds.

The winners receive the Manfred Lachs Trophy and also, best memorial and best orator awards are given by the organisation.

The International Criminal Court Moot Court Competition is conducted annually by the Grotius Centre for International Legal Studies and was founded by the Pace Law School in 2004.

The competition is held in the month of May in the Hague, Netherlands.

Universities all around the world are invited for taking part in a large-scale moot court competition simulating the proceedings of the International Criminal Court (ICC).

The Competition comprises of an extensive six-day social and educational program, which brings together students of different backgrounds and cultures to The Hague to test their skillsets as future international lawyers.

The object behind this moot is to extend support for international law and the fight for liberty by gathering the young generationsâ support.

The Competition involves collaboration with judges from international courts and tribunals, professors of international criminal law, and other legal experts. This combination makes the moot court seem as real as possible.

All participating teams must have to mandatorily nominate the name of one person to be on the panel.

This prestigious international Moot is organized by the Association for the Organization and Promotion of the Willem C. Vis International Commercial Arbitration Moot.

The goal of the Vis Arbitral Moot is to foster the study of international commercial law and arbitration for resolution of international business disputes through its application to a concrete problem of a client and to train law leaders of tomorrow in methods of alternative dispute resolution.

The candidates need to fill the registration certificate before he can be held eligible.

Along with the winners and runners-up trophy, many other prizes are given away by the organisation itself.

The Leiden Sarin Air Law Moot Court is conducted by Sarin Memorial Legal Aid Foundation and International Institute of Air and Space Law of Leiden University in the Netherlands, along with the Maltese Ministry of Tourism and the University of Malta.

This is the eighth edition of the reputed contest. Students can to their advantage learn a lot from this moot court about international law and also can make a good contact base around the world.

The Competition has been conducted this year from 6-9 April 2017 in Valletta, Malta.

In case more than 3 countries register from one country, a national selection round shall be held to determine which university shall represent the nation.

The competition shall be judged by three duly qualified judges.Â

There shall be a championship trophy which shall be given to the winners who will be decided on the basis of the aggregate number of the team score.

To determine that these moots are the best globally, their popularity among law students and their vibrant history has been considered. Participating in these moots has a great impact on a law student as it gives him unlimited exposure and a chance to make contacts on a global level. Although mooting is an art that requires a specific skill set and sometimes years of experience to master.Â So gear up and mark the dates on your calendar, participate in these moots to experience on a practical level, what it will be, to argue in front of an actual court, against an actual lawyer.