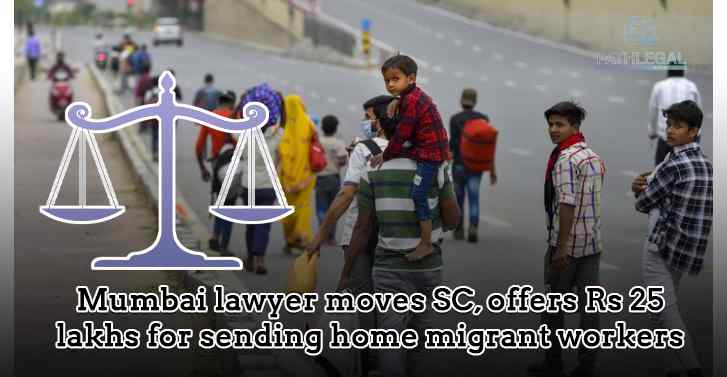 A Mumbai-based lawyer has moved theÂ Supreme CourtÂ with a unique PIL, offering to bear cost of sending back homeÂ migrant workersÂ who hail from his home districtÂ Sant Kabir NagarÂ in Uttar Pradesh but are stuck in Mumbai due to the lockdown.

Sagheer Ahmed Khan, hailing from Sant Kabir Nagar district, had reached Mumbai in 1999 to start practice as a lawyer inÂ Bombay High Court. For first two years, he had lived in a shanti and as years passed by, he succeeded in the big city as an advocate. In his PIL before the SC, filed through advocate Ejaz Maqbool, Khan offered to deposit Rs 25 lakhs in the SC towardsÂ transportation costÂ of migrant workers to his home district.

He said many persons from Sant Kabir Nagar and Basti districts were working in Mumbai and stuck in the city since March 25 without wages after lockdown was announced. Narrating the deplorable and pitiable living conditions in the shanties from his own experience, the advocate said most migrant workers want to go back home and in the absence of transport started walking home or paid RS 5,000 each to be herded into mini-trucks like animals for an arduous 1500 km journey back to their homes in Sant Kabir Nagar.

He said he sent repeated emails to UP chief minister, but got no response even after offering Rs 25 lakhs to arrange for trains for migrant workers from his native district. He said he tried to get through the helpline number ofÂ UP government, but that remained out of reach.

"I am filing the present petition as conscience is not allowing me to let poor migrants remain in lurch in a city where they are living in deplorable conditions without wages. I am offering to Rs 25 lakhs towards cost of travel of migrants belonging to districts bats and Sant Kabir Nagar irrespective of their caste, creed and religion. Petitioner to show his bonafide is ready and willing to deposit Rs 25 lakh in the Supreme Court registry," he said.