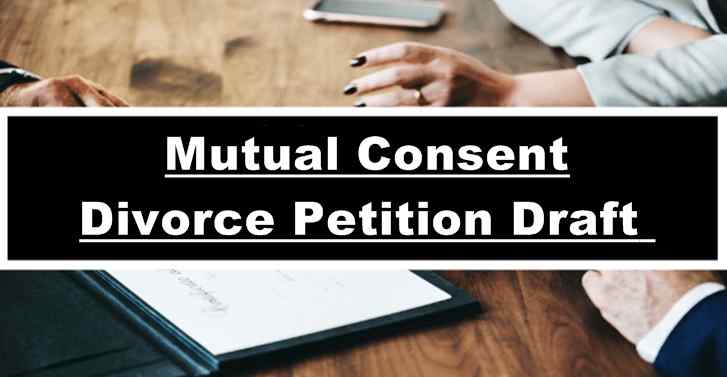 MOST RESPECTFULLY SUBMITTED AS UNDER:-

1. That the marriage between the parties was solemnized onÂ  ââat ââââ-, by Hindu rites and ceremonies. The said marriage was consummated thereafter and the parties cohabited as husband and wife at the matrimonial home i.e. âââââ-. The particulars showing the details of the parties to the present petition is given hereunder:-

2. That there is no issue out of the wedlock of the parties. (or describe the name age and date of birth of the children and also described the agreement about the custody of the children amongst the couple).

3. That the parties could not adjust with each other due to temperamental differences and their marriage has broken down irretrievably and it is now not possible between the parties to live as husband and wife anymore.

6. That the parties have now decided to dissolve the marriage legally through a decree of divorce on mutual consent. The parties have settled all their claims, counterclaims, etc. and the respondent-wife has received her entire Stridhan, Permanent alimony, maintenance, etc. and there is no due with regard to any other claim between the parties now.

7. That the party has decided to withdraw all the complaints, counter complaints against each other.

8. That the present petition is not being filed in collusion.

9. That there are no other divorce proceedings pending before any other court.

10. That the matrimonial home of the parties was at âââââhence this court has the jurisdiction to grant the decree of divorce as prayed for.

11. That there are no legal impediments in the grant of the decree of divorce to the parties on the basis of mutual consent.

Any other order which the court may deem fit and proper in the facts and circumstances of the present case be also passed in favor of the petitioners.

This format is helpful for lawyers in India.