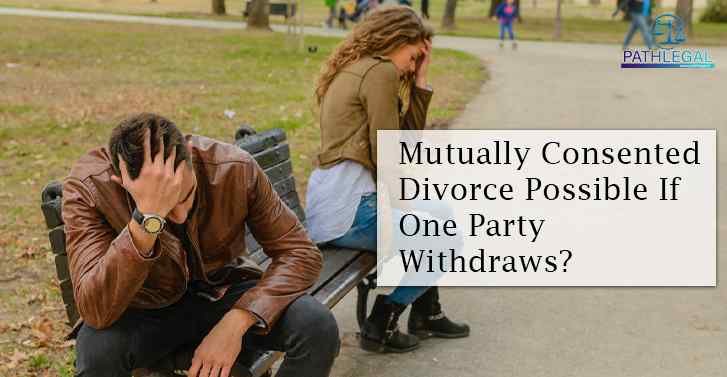 Mutually consented divorce is when both spouses agree mutually out of free will on getting divorced. This is one of the convenient modes of divorce. It is provided that both spousesâ agreement has to be mutual and free consent and not persuaded or forced to do.

In Smt. Sureshta Devi v. Om Prakash, there was such a situation. The parties had filed a petition for divorce by mutual consent under Section 13B, Hindu Marriage Act, 1955, but later wife filed petition to withdraw before the District Court and the court dismissed the divorce petition. Later, High Court decreed divorce when appealed. This was challenged in Supreme Court and the court had made an observation that if the petition is filed on mutual consent of both parties then the consent has to be intact till the divorce is decreed by the court and in case, one party withdraws then it does not become mutually consented divorce and such a divorce would not be possible.

Section 13B of the Act is transparent on the point of mutual consent of both the spouses. So, the Â Apex Court remarked seeing that divorce was granted even when one party filed petition for withdrawing:

âFrom the analysis of the Section, it will be apparent that the filing of the petition with mutual consent does not authorise the court to make a decree for divorce. There is a period of waiting from 6 to 18 months. This interregnum was obviously intended to give time and opportunity to the parties to reflect on their move and seek advice from relations and friends. In this transitional period one of the parties may have a second thought and change the mind not to proceed with the petition. The spouse may not be party to the joint motion under sub-section (2). There is nothing in the Section which prevents such course. The Section does not provide that if there is a change of mind it should not be by one party alone, but by both.â

When considering the appeal by appellant-wife in the case, the top Court opined that :

âAt the time of the petition by mutual consent, the parties are not unaware that their petition does not by itself snap marital ties. They know that they have to take a further step to snap marital ties. Sub-section (2) of Section 13-B is clear on this point. It provides that "on the motion of both the parties .... if the petition is not withdrawn in the meantime, the Court shall pass a decree of divorce What is significant in this provision is that there should also be mutual consent when they move the court with a request to pass a decree of divorce. Secondly, the Court shall be satisfied about the bonafides and the consent of the parties. If there is no mutual consent at the time of the enquiry, the court gets no jurisdiction to make a decree for divorce. If the view is otherwise, the Court could make an enquiry and pass a divorce decree even at the instance of one of the parties and against the consent of the other. Such a decree cannot be regarded as decree by mutual consent.â

Then it was observed by the Supreme Court:

âSub-section (2) requires the Court to hear the parties which means both the parties. If one of the parties at that stage says that "I have withdrawn my consent", or "I am not a willing party to the divorce", the Court cannot pass a decree of divorce by mutual consent. If the Court is held to have the power to make a decree solely based on the initial petition, it negates the whole idea of mutualitly and consent for divorce. Mutual consent to the divorce is a sine qua non for passing a decree for divorce under Section 13-B. Mutual consent should continue till the divorce decree is passed. It is a positive requirement for the court to pass a decree of divorce. "The consent must continue to decree nisi and must be valid subsisting consent when the case is heard". [See (i) Halsbury Laws of England, Fourth Edition Vol. 13 para 645; (ii) Rayden on Divorce, 12th Ed. Vol. 1 p. 291 and (iii) Beales v. Beales, [ 1972] 2 All E. R. 667 at 674].â Further details will be provided by Lawyers in India.