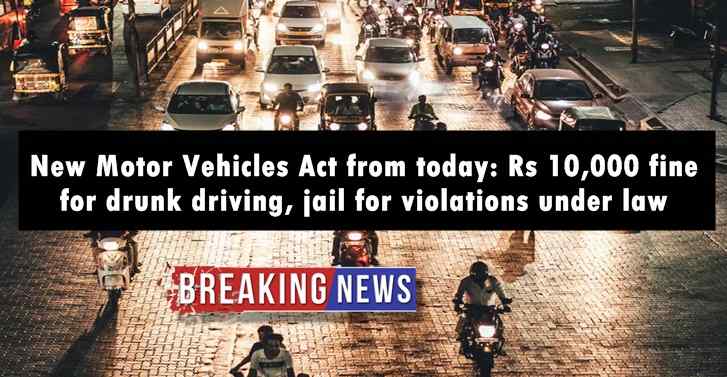 Driving under the influence of alcohol, not giving way to ambulances or fire brigade will attract a penalty of Rs 10,000 or imprisonment starting September 1. In some cases, an individual violating laws could end up paying the fine and going to jail.

Meanwhile, if two-wheeler owners are caught riding without helmets, they will not only have to pay a fine of Rs 1,000 but could have their licences suspended for the next three months.

The stricter rules have been implemented to imbibe a sense of responsibility among citizens as it could lead to a reduction in the number of traffic rule violations in the country. But the rules are also aimed at increasing accountability.

Under the fresh rules, a road contractor can also be penalised for failing to maintain standards pertaining to road design. In fact, enforcement authorities will have to pay twice the penalty for any offence committed.

This clearly indicates that the new rules aim to address the issues that go far beyond just on-road traffic violations. With law and order becoming a massive problem on Indian roads, Union Minister for Road Transport and Highways Nitin Gadkari is aiming to change Indiaâs reputation with stricter rules.

Penalties have been increased under the new law to make people more aware of road safety; earlier people would bribe their way after violating rules as the penalties were low compared to the fresh amendment.

The law also aims to reduce incidents of untrained people obtaining driving licences (DL) by reducing human interference. Under the fresh rules, the process of obtaining a DL will be much hardersomething that would help keep away untrained drivers from roads.

It is worth noting that the amended act provides scope for increasing the fine amount by 10 per cent annually. Higher fines, according to authorities, will not only help in increasing awareness but it would keep people aware of traffic rules, which were often broken under the previous set of rules.

Most commuters have welcomed the move as they believe that the higher penalties would help significantly improve vehicular discipline and lead to an overall reduction in cases of accidents and traffic violations.

While the success of implementation will be a key factor for the amended rules, the move is likely to lead to a reduction in the high number of road accidents in the country.