No Immediate Arrest, 120 Days to Appeal, Mountain of Legal Bills 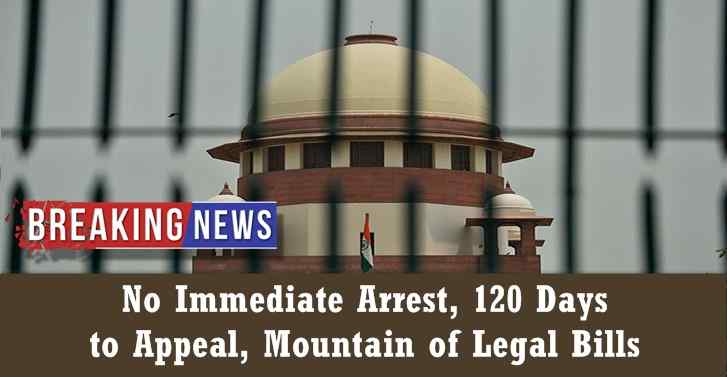 The immediate possibility is that those excluded from the list might land themselves in a long legal fight that many cost them a fortune. The government has set up 300 Foreigner Tribunals for appellants.

Guwahati:Â The updated National Register of Citizenship (NRC) is out. But the question still remains. Whatâs next? What will happen to those left out of the NRC?

The immediate possibility is that these people might land themselves in a long legal fight that may cost them a fortune. The Assam government has already declared that those left out of the NRC final list would neither be labelled as âforeignersâ nor âarrestedâ till the matter is in court, but have to take the Foreignersâ Tribunal route to prove their citizenship.

Citizens for Justice and Peace (CJP), a non-governmental organisation, which already has provided legal assistance to those who were left out of the draft NRC released last year, believed that the cost of one claimantâs legal battle to prove his or her citizenship may go up to several lakhs.

Zamser Ali, Assam State Coordinator of CJP, said, âIt may cost each claimant from minimum Rs 40,000 to several lakhs if he or she needs to take the battle to the Supreme Court. The applicant would have to bear the cost of both legal and administrative proceedings normally. While the legal expenses include the lawyerâs fees, the administrative expense would cover other paper work and collection of relevant documents.â

The CJP has also trained some 100 paralegals in Assam to help defend the citizenship of people whose names have been excluded from the NRC. âOur legal team and volunteers will assist all those genuine citizens, based on the cutoff date of March 24, 1971, who might be left out of the NRC final list. The CJP has around 500 members, including lawyers, working to help the âgenuineâ Indian citizens who might become victims due to some technical errors,â he added.

Not just CJP, but various organisations like Association for Protection of Civil Rights (APCR), Assam chapter as well as a group of indigenous Muslim lawyers of the city have announced to provide âfreeâ legal assistance to the genuine Indian citizens who may be excluded. Besides, both the ruling party and opposition Congress have come up with similar assistance in an attempt to minimise the possible âchaoticâ situation and to reduce the financial burden from the shoulders of the claimants.

âThere is a high possibility that illegal syndicates may try to exploit the situation and many may try to mint money from those already in distress. A group of some 200 lawyers will guide and assist all the genuine citizens left out of the list for free,â said Gauhati High Court senior advocate Nekibur Zaman who has joined hands to provide free assistance to those excluded.

Meanwhile, considering the cost and other factors, the state government, too, hasÂ announced to provide free legal services, including fees for processing, drafting, typing and the remuneration of lawyers. The expenses will be borne by the District Legal Services Authorities (DLSA). The state government in an order issued in December 2018 notified that people whose annual income was less than Rs 3 lakh were eligible for free legal services.

âA provision has to be made by the state government by notification to include this category of people (NRC dropouts) as eligible to avail of the free legal service,â a source said.

Till now, a member of a Scheduled Caste or Scheduled Tribe, a victim of human trafficking, a beggar (as referred to in Article 23 of the Constitution), a woman or a child, a disabled person, a victim of a mass disaster or ethnic violence, of caste atrocity or natural calamities like flood, drought, earthquake or industrial disaster, an industrial workman and people in custody are eligible for the free service.

Earlier, a person declared a foreigner by a tribunal in the state was immediately taken into custody and shifted to one of the six detention centres set up inside central and district jails, but as per a recent Supreme Court order, those who have been in detention for three years or more can be released on bail on sureties signed by two Indian citizens.

However, there is a catch. Anyone who does not have any one of theÂ prescribed government documentswill have to struggle for the necessary government certificate as their names were not cleared in NRC.

âFrom Bengali to religious minorities, to Gorkhas and even tribals, all have become victims of the situation. Everyone is suffering. People have committed suicides. Many died in detention camps. After the list comes out, those left out might suffer,â Ali said.

Meanwhile, apprehending tension and possible law and order situation, Assam Police readied itself with elaborated security arrangements across the state and along the borders. In addition to the existing security forces operating under the unified command structure in Assam, at least 218 additional companies of central forces have been deployed to ensure peace across the state.

Assam Police chief Kuladhar Saikia said, âIn a previous assessment, out of some 2500 NRC Seva Kendras (NSKs), we had found around 1,200 to be sensitive. But the number of sensitive NSK centre is dynamic as situations and challenges are evolving with each passing moment.â

All district police control rooms, Assam Police headquarters and the NRC headquarters have already been linked for sharing real-time information too. The state police have been also in touch with its counterparts in the bordering states to contain any kind of eventualities.

The DGP added, âAll neighbouring statesâ counterparts are in constant touch to avert any kind of anti-social elements trying to create tension. Social media is on the watch too.â

Exercises like area domination and night patrolling were intensified in remote areas and all Nagarik committees (civil police groups) and Village Defence Parties (VDPs) in the state have been bestowed with the responsibility of organising public meetings to educate the people and not to panic if their names donât feature in the NRC list.

Hours before the publication of the NRC final list, Assam CM Sonowal in a public message reiterated, âThe NRC, which has been updated by the state NRC Coordinator (Prateek Hajela) and his team under the monitoring of the Supreme Court of India and supervision of the Registrar General of India, is an outcome of the untiring efforts of the thousands of people.â

Sonowal also said that the state government would take care of the cause of the excluded people and due care would be taken so that nobody is subjected to any harassment. He also maintained that as long as the appellantâs plea remains sub-judice with the Foreignersâ Tribunal, he or she cannot be treated as a foreigner. He, therefore, appealed to the people of the state to maintain peace and set an example of a matured society.

However, his party leaders who have been constantly raising questions on the accuracy of the NRC continued to believe that the NRC would be erroneous. Stateâs finance minister Himanta Biswa Sarma said, âItâs the Foreignersâ Tribunal which are going to give us the main picture later. So there is nothing to rejoice or to be sad now. The Centre and the state government have already begun to think about the solution for illegal infiltrators in Assam in future.â