Online Harassment Of Women:Complexities And Punishments 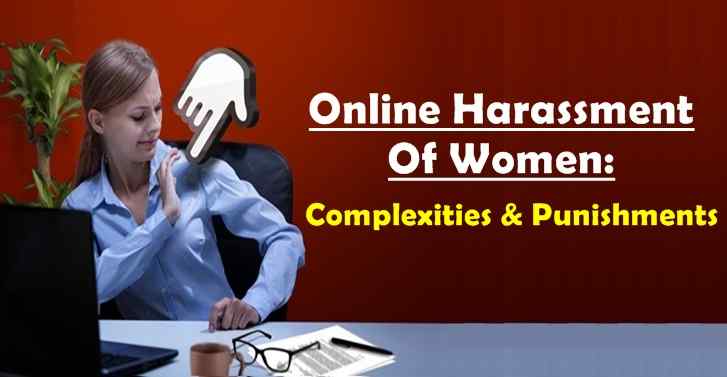 When we talk about women & Cyber Security there are two parts in which we may define the crimes.

A demand or request for sexual favours; or

354 A is usually committed by the offenders, during usual chat or to abuse a sudden demand of sexual favours comes, Â be it Twitter, Facebook or WhatsApp, people do this, people who do this used to become so innocent when Laws are quoted, the exact reality is, their intentions & motives are to abuse and/or to get sexual favours.

Showing pornography against the will of a woman; or

Another thing, Â an offence but normalized now, Â this can lead to rape, In a society like ours, teenagers become the victim of this in a broad sense, I am talking about rape here, Tutors, home tutors, servants, gardener and peon who are close to a teenage girls tries to close more, show such things to make the victim in their control and rape happens, very few girls come out of this shell and speak, else not even a case is registered.

Same approach in a different manner seen at Facebook, Twitter, etc. where girls get photos of the penis via Direct Message, in this case, the person sending things like this either needs a therapist or committing offence willingly.

Making sexually coloured remarks shall be guilty of the offence of sexual harassment.

We made it normal now, an abuse, it related to anything is normal now but when we see with the legal lens, itâs an offence especially when the abuse made to a woman.

Any man who commits the offence specified in clause (i) or clause (ii) or clause (iii) of sub-section (1) shall be punished with rigorous imprisonment for a term which may extend to three years, or with fine, or with both.

Any man who commits the offence specified in clause (iv) of sub-section (1) shall be punished with imprisonment of either description for a term which may extend to one year, or with fine, or with both.

Online stalking via Facebook, taking Screenshots & posting photos on other websites comes within the ambit of this provision, many of laymen not aware of this fact but non-awareness of law is nothing to do with it.

The lawyer is reachable at [email protected]Â