Petition in SC dismissed, Mukesh Singh out of legal remedies against Feb 1 execution 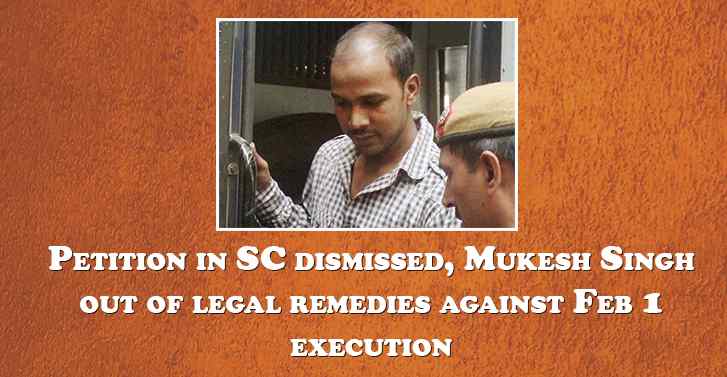 A petition filed by 2012 Delhi gang-rape convict Mukesh Singh against the presidential order rejecting his mercy plea has been rejected by the Supreme Court on Wednesday.

A three-judge bench led by Justice R Banumathi ruled that Mukesh Singhâs argument that the government did not produce all relevant records before the President did not hold water.

The bench also brushed aside Mukesh Singhâs references to the suffering and humiliation that he claimed to have faced in prison. âSuffering in the prison cannot be ground for challenging mercy powers exercised by the President,â the bench, also comprising justices Ashok Bhushan and AS Bopanna, said.

A third argument centered around the speed at which the mercy petition was decided was also turned down. Between the Delhi government and the Home Ministry, the government had completed all the procedures relating to the rejection of Mukesh Singh within four days. It was a record, the fastest rejection of a mercy petition ever.

Rebutting Mukesh Singhâs in the top court on Tuesday, the governmentâs second most-senior law officer Tushar Mehta had pointed to the many judgments that had criticized delays in decisions on mercy petitions. It is the delay that has a dehumanising effect, Mehta said.

Mukesh Singh and his three other accomplices, who were convicted for the gang rape and murder of a 23-year-old paramedic student in a moving bus in Delhi in 2012, have been sentenced to death. A Delhi court has ordered the four of them to be executed on February 1

Mukesh Singhâs plea challenging the rejection of his mercy plea was the last legal remedy available to him to put off his execution on February 1. Before approaching the President to seek mercy, Mukesh Singh had filed a curative petition in the Supreme Court which was also rejected.

But it does not imply that he will be hanged at 6 am on February 1, just 70 hours away.

Since the four convicts were sentenced by a common verdict, the court had issued a single death warrant to execute all four. This means that the four will only be hanged once all of them exhaust their legal options.

Hours before Wednesdayâs verdict in Mukesh Singhâs case, another convict Akshay Thakur had filed a curative petition in the top court faulting the Supreme Courtâs verdict that could lead to their execution. Once this petition is decided, all three of them are entitled to move mercy petitions before the President.