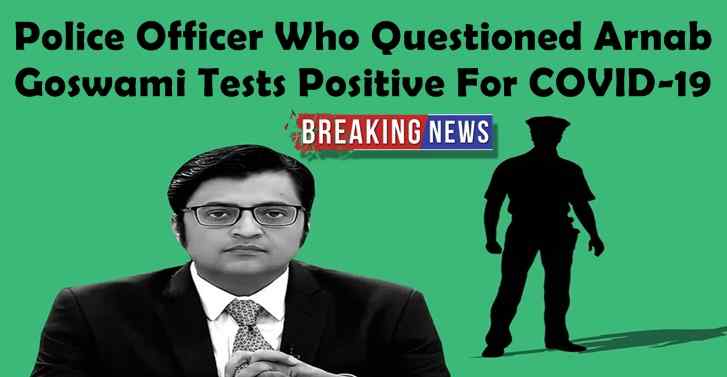 One of the two police officers, who questioned Republic TV editor-in-chief Arnab Goswami in connection with an FIR registered against him for stoking communal sentiments through his news show, tested positive for coronavirus. According to media reports, senior advocate Harish Salve, appearing for Goswami, raised this point while seeking quashing of FIR registered against the journalist.

The senior journalist was questioned on April 28 for 12 hours with regard to FIR on alleged defamatory statements. Besides this, several complaints and multiple FIRs were registered against him in various states over his alleged defamatory statements against Congress chief Sonia Gandhi in connection withÂ Palghar mob lynching incident. Salve also demanded that the probe in the Palghar incident remarks should be transferred to the CBI. He told the apex court that this case is all about a political party targeting a journalist as the complainants are members of one particular party.

A bench of Justices D.Y. Chandrachud and M.R. Shah extended the interim protection granted to the journalist against any coercive action and reserved its verdict on his plea seeking quashing of the FIR. The bench said it would pronounce the verdict on quashing the FIR and on the application of Maharashtra government alleging that the accused has been "browbeating" the police by "creating fear psychosis,â later this week.

The bench said the court can give liberty to Goswami to approach the Mumbai High Court forÂ quashing the FIR after the expiry of interim protectionÂ already given to him by the apex court earlier in the cases related to Palghar incident.

The bench had pointed out that the multiple FIRs appear to be the same. Senior advocate Kapil Sibal, appearing for the Maharashtra government, said the journalist cannot stigmatise people by way of sensationalising things. The senior lawyer urged the court to ask the CBI for the report in the case for giving him extension of interim protection.

On April 24, the top court hadÂ granted three-week protection to GoswamiÂ against any coercive steps in connection with some FIRs lodged against him in various states for alleged defamatory statements made during news shows on Palghar mob-lynching of three persons, including two saints in Maharashtra.

The May 2 FIR was lodged in Mumbai against him and two others for allegedly hurting religious sentiments by making derogatory remark regarding a mosque located in suburban Bandra, a Mumbai Police officer had said.