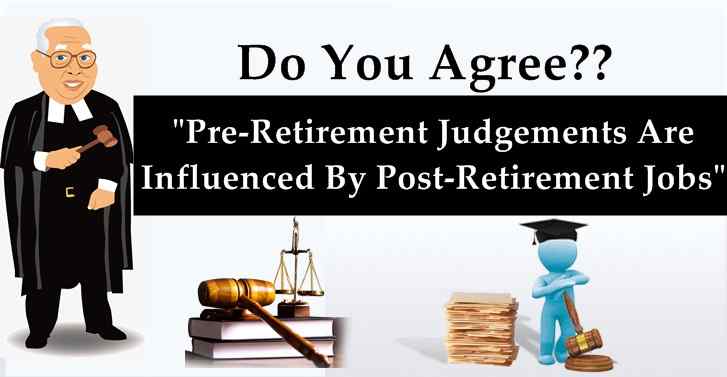 He had stated that âPre-retirement judgements are influenced by a desire for a post-retirement job...â

"But this clamour for post retirement jobs is adversely affecting impartiality of the judiciary of the country and time has come that it should come to an end...â

"For two years after retirement, there should be a gap (before appointment), because otherwise the government can directly or indirectly influence the courts and the dream to have an independent, impartial and fair judiciary in the country would never actualize.â

"The tendency of judges to follow the ballot box, to get carried with the times, has to be avoided. The judiciary is the lifeline of a democracy, and if people lose faith in it, they lose faith in democracy itself.

"Now through judicial verdicts post retirement jobs are being created. My experience in this regard is quite bad. When I was a minister I would be wary while meeting a retiring judge that he should not hand me his bio data...

He also stated that âI have held a strong view that Judges of the Supreme Court and the High Courts must not be eligible for jobs in the government after retirement. In some cases the pre-retirement judicial conduct of a judge is influenced by the desire to get a post retirement assignment. However, we are still operating under a system where various tribunals and other quasi-judicial assignments are filled up with retired judges.âSome of the lawyers in India had supported his statement and some don't.