Private Car Not A Personal Zone, Mask Is A Must: Delhi Govt Submits In HC 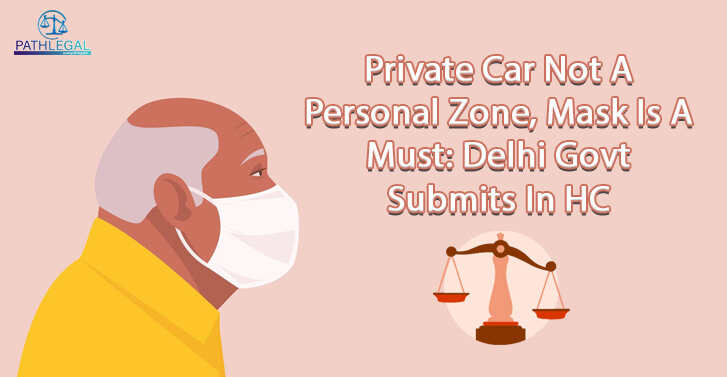 The Delhi government on Wednesday said in the Delhi high court that a private vehicle is a public place and not a personal zone and thus every person moving around in his private or official vehicle must âcompulsorilyâ wear a mask.

The submissions were made before Justice Navin Chawla during the hearing on a plea by a lawyer who challenged the Rs 500 challan issued to him for not wearing a mask while he was driving alone in his private car. In his plea, the petitioner, Saurabh Sharma, said that on September 9 while driving to work he was stopped by Delhi Police officials and was fined for not wearing a mask even though he was alone in the car.

In an affidavit filed through advocate Devesh Singh, additional standing counsel of the Delhi government, the court was told that âit is true that the public may not have access for such private vehicle, as a matter of right, but the public have the opportunity to approach the private vehicle when it is on a public roadâ. It also said that the Supreme Court has held that a private vehicle is a public place.

The government submitted that wearing masks while driving was made compulsory in April and the order remains in force till date.

Representing the petitioner, advocate Joby P Varghese told the court that subsequent to the April 4 office order of the Delhi Disaster Management Authority (DDMA), the Union health ministry held a press conference where it said persons driving alone in a car are not required to wear a mask.

Advocate Farman Ali Magray, appearing for the ministry, sought time from the court to place the correct position before the court. Justice Chawla granted the time but warned that no more time would be given on the next date of hearing.

Sharma, in his plea, has sought quashing of the challan, refund of the Rs 500 paid as fine and compensation of Rs 10 lakh for alleged mental harassment suffered by him.

In his plea, Sharma claimed that the officials who issued the challan to him failed to provide any executive order to establish that it was mandatory to wear masks while travelling alone in a private vehicle.

They also did not heed his request to write on the challan that he was driving alone and he paid the âillegalâ fine under protest, the petition said.

The court listed two other similar pleas by Aditya Kaushik and Deepak Agarwal on January 7, when the matters would be heard together.