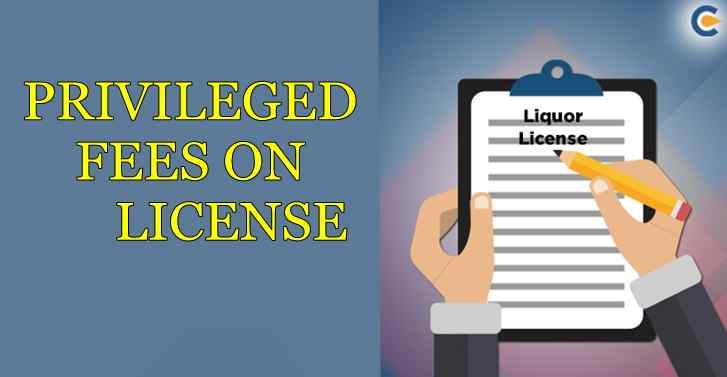 Note on Privilege Fees for a liquor License Introduction The Grant and Renewal of Liquor Licenses are governed by the following Acts :

(a) Maharashtra Distillation of Spirit and Manufacture of Potable Liquor Rules, 1966 .

Â General Provisions and Judgements with Reference to Payment of Privilege Fees The privilege fees is required to be collected, at the time of an extension / renewal of an agreement after the expiry of previous one. The Provisions in different rules under the Bombay Prohibition Act refer to the sanction of different types of agreements.

Rule 5A of The Bombay Prohibition (privileges fees) Rules 1954 states that the fee payable by any licensee for the privilege of having the lease or sub-lease of his licence in Form âCL-Iâ under the Maharashtra Country Liquor Rules, 1973 and in Form âPLLâ or âIâ under the Maharashtra Distilation of Sprit and Manufacture of Potable Liquor Rules, 1966 under any agreement or arrangement to any person with the previous written permission of the Government or Commissioner as the case may be shall be the same as the fee chargeable for grant or renewal or continuance of such licence, whichever is higher. According to Sub Rule 3 of Rule 24 of the Maharashtra Country Liquor Rules, 1973 , any licence granted under sub-rule (1A) shall be renewed by the Collector for a period not exceeding one year at a time on payment of fees on the scale mentioned hereunder, unless the Collector has reason to believe that there has been a breach of any of the terms and conditions of the licence, or that the retail licensee has not been working it properly and the fees of such license shall be Rs 40,000 in a city with a population of 20 lakhs.

Â  Â  Â  Â  Â  Â  Â Under Rule 4 of the Maharashtra Distillation of Spirit and Manufacture of Potable Liquor Rules, 1966 , the licence may be renewed by the State Government for a period not exceeding five years on payment of renewal fee inclusive of consideration of fifty thousand rupees. In the judgement , Gajraj Singh & ors. vs. State Transport Appellate Tribunal & ors., (1997) 1 SCC 650 Apex Court while considering the term renewal of lease or licence contained in document, observed that âgrant of renewal is a fresh grant though it breathes life into the operation of the previous lease or licence granted as per existing appropriate provisions of the Act, rules or orders or acts intra vires or as per the law in operation as on the date of renewalâ Judgment of Supreme Court of India in State of West Bengal Vs. Calcutta Mineral Supply Co. Pvt. Ltd. dated May 06, 2015 in this case the Court opined that opinion that the respondent Darjeeling Dooars Plantations (Tea) Ltd. is liable to pay salami which is one of the conditions of the Rules for the purpose of renewal of lease. The demand made by the Collector is fully justified. The impugned order passed by the High Court, therefore, cannot be sustained in law. In the judgement , In the judgement , Shri Suresh Krishnaji Lakudkar Vs. State of Maharashtra through its Secretary Department of State Excise and Prohibition, The Collector (State Excise) and The Superintendent of State Excise para 21 states âThe renewal is taken care of by next subrule i.e. Rule 24[3].It states that every license granted can be renewed by the Collector for a period of not exceeding one year at a time on payment of fees as per scale mentioned in that subrule.â After perusing these judgements and provisions it is clear that Privilege Fees has to be paid at the time of Renewal or extension of an Agreement.

Â  Â  Â  Â  Â  Â  Â  Â  Â  Â  Â Payment of Privilege Fees when the Nature of the Agreement has been changed Firstly it is pertinent to note that , when there is a change in the Nature of the Agreement due to an Alteration approval of the State Excise Commissioner has to be taken according to the rules and the approval maybe sanctioned subject to the payment of privilege fees as prescribed by the Bombay Prohibition (privileges fees) Rules 1954. In the judgement , Deshbhakta Ratnappa Kumbhar Panchganga Sahkari S akhar Karkhana Ltd. vs Minister (State Excise) , license condition No. 13 states "Except with the written permission of the Commissioner, the licensee shall not sell, manufacture, transfer or sublet the right of manufacture conferred upon him by this licence not shall he, in connection with the exercise of the said right enter into any agreement which is in the nature of a sub-lease. If any question arises whether any agreement or arrangement is in the nature of sub-lease the decision of the Commissioner on such question shall be final and binding on the licensee."

A bare reading of the above condition, it is clear that except with the written confirmation of the Commissioner, the licensee shall not sell, manufacture, transfer or sublet the right of manufacture conferred upon him by this licence etc. Therefore, the only authority if at all ought to grant such a license, is the Commissioner of State Excise and not the State Government, while exercising it's revisional power. In the judgement The Collector of Bombay and others Vs Meena Narayan Idnani The first question which requires determination is whether the death of one of the partners out of the two result into dissolution of the firm and whether the surviving partner can carry on the business as sole proprietor without seeking transfer of licence. As mentioned hereinabove, Rule 21 demands that when the licence is sought by the more than one person who are carrying on business in the partnership, then the partnership is required to be declared to the Collector before the licence is granted and the names of the partners are entered jointly in the licence. It is obvious that the licence is secured by the respondent and her husband in the capacity as partners of the firm and not in their individual capacity. On the death of one of the partner out of the two, the partnership automatically stands dissolved and it is not open for the surviving partners to carry on the business in the character of a partners of a dissolved firm.

Â  Â  Â  Â  Â  Â  Â  Â  Â  It is always open for surviving partner to carry on the business as a sole proprietor but the capacity as the sole proprietor is different and distinct from the capacity of partner in dissolved firm. In case the sole proprietor desires to hold licence by deletion, of the name of the deceased partner, then such request amounts to transfer of the licence. The Second point of consideration in this judgement the appellants are charging the fees under Rule 5, which is equivalent to the fee for grant of licence and which is Rs. 30,000/- per year and that fee is excessive and unreasonable and has no nexus to the services rendered. The contention that the amount of Rs. 30,000/- charged towards fees is not accurate. The plain reading of the section makes it clear that the State Government has exclusive right or privilege of selling the liquor and the fees charged is to be considered inclusive of the rent or consideration for transfer or grant of such right or privilege. It is therefore obvious that the Government enters into a contract with the holder of the license for carrying out the trade or privilege which exclusively vests in the State Government and while conferring the right or the privilege, the amount charged is not for any services rendered and consequently the concept of requirements to render service for charging fees does not arise. In the judgement , Somras Distillers Vs. State of Maharashtra and Ors. there was a Transfer of existing licence to newly constituted firm under the same name while deleting two erstwhile partners and adding names of four new partners .

Â  Â  Â  Â  Â  Â  Â  Â  Â  Â  Â  Â The relevant date for payment of requisite fee for amendment in the licence is not the date on which the application is made by the party seeking amendment of names in the licences but the date on which the permission is granted and in the present case admittedly the permission was granted by the State Government to the petitioner-firm for deletion of names of two erstwhile partners and addition of names of four new partners on 17-4-1993 and on that date the fee payable was in accordance with the Maharashtra Country Liquor (Amendment) Rules, 1993. There is no dispute that the deficient fee of Rs. 10,75,000/- has been claimed by the competent authority on the basis of the amended rules and that being admitted position, the communication dated 2.6.1993 asking the petitioner-firm to deposit an amount of Rs. 10,75,000/- towards the amendment fees in the licences cannot be faulted. Hence it is concluded from the above judgements the nature of the partnership deed changes as there is a change in the constitution of the firm . Therefore the privilege fees has to be paid in accordance with the provisions of the Bombay Prohibition (privileges fees) Rules 1954.