RIGHT TO INFORMATION:"A Real Weapon Of The Common Man" 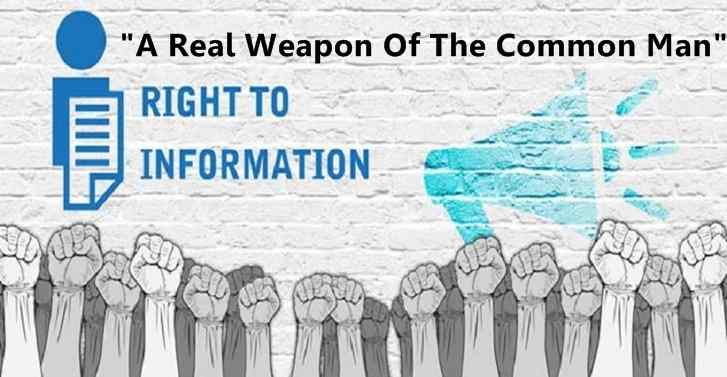 It can be also be called the second wave of democracy. It is a part of the fundamental right,Â  the right to know and it implicates right to freedom of speech and expression. Under this actÂ  the central and state government have set up several mechanisms and institutions to facilitate easy access to information.Â  Transparency and accountability of governance started with this act. The ultimate objective of this act is to minimize corruption and inefficiency in public offices. This really makes the public officials to maintain all the records. With this act, the pressure is created on the group of a public official to maintain the proper records and documentation.Â  This act started as an initiative for the citizens to know that how the money is being spent in government projects and schemes,Â  about every day governance, decision and it takes a whole movement of almost two decades to get this legislation.Â

Mazdoor kisan shakti sangathan in 1994 at Rajasthan wanted to know how the development work goes on, especially the construction work happening in the state of Rajasthan. They tried to obtain some information but they don't get proper information. Different people gave them different information. Then they take a pathbreaking decision to organize public hearings in several parts of Rajasthan. They organize various Jan sunwanis about muster rolls and corruption in development works in 1994. Then along with the press council, the mazdoor kisan shakti sanghatan has created a draft bill on RTI in 1996. H.D. shourie committee has come out with a draft bill and later in 2005 this bill is passed and becomes an act.

It came out after a two decades of struggle.Â Right to Information (RTI) empowers any citizen of India to request information from a " public authority ",Â  certain agency likeIB DRI NCB BSF CRPF are excluded and certain information like those relating to security public safety correspondence with the foreign government are excluded.

The first time limit is 30 days when a citizen applies under RTI, then there is a mandatory duty to provide information which the person is seeking. But there is some information in which, we can't wait for 30 days, like about the life and liberty of the person then there is a time limit of 48 hours because life and liberty are very precious time can't wait for it. In case the interest of the third party is there, then the time limit is 40 daysÂ Â
Also, if there happens to be a situation in which any person fails to provide information within 30 days, then there will be a penalty of Rs.50 per day and puts a lot of pressure on the public official to provide the required information. Also, there are two types of appeal with the citizen if the PIO denied providing information.Â

It one of the most progressive and liberal legislation in the history of India. Due to this act, only the citizens will get to know about every day affairs of the government. It is the real weapon of the common man.Â  But there is still a lack of awareness among people in the use of this progressive, liberal idea.

The purpose and objective of this act will only be achieved when the there is comprehensive knowledge and awareness among the people to get this information and they need to know to the basic thing of how to acquire the information, how to draft the appeal and all this will lead us to a more progressive world.Â