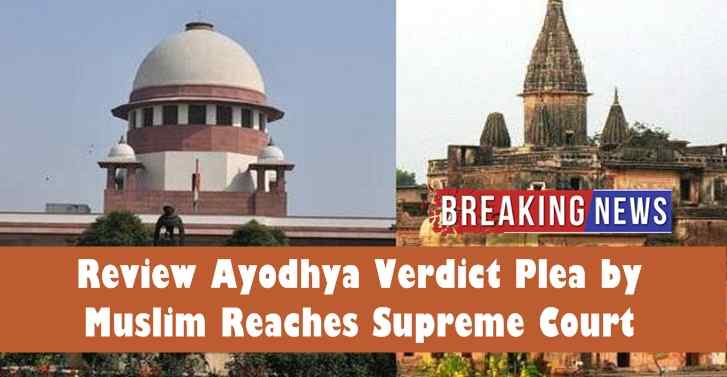 This is the first review petition filed by a Muslim party against the verdict that had ordered a 5-acre plot be given to the Sunni Board by the government because the community had been wronged more than once.

Maulana Syed Ashhad Rashidi, a legal heir of original Ayodhya land dispute litigant, on Monday filed a review petition in the Supreme Court against its ruling in favour of the Ram temple at the disputed site. This is the first review petition filed by a Muslim party against the verdict that had ordered a 5-acre plot be given to the Sunni Board by the government because the community had been wronged more than once.

In its request to the Supreme Court to revisit its verdict, Rashidi said the judgment by the five-judge bench had acknowledged âfew of the several illegalitiesâ committed by the Hindu Parties but âproceeded to condone the said illegal acts and awarded the disputed site to the very party which based its claims on nothing but a series of illegal actsâ.

Rashidi has submitted that he was âconscious of the sensitive nature of the issue and understands the need to put a quietus to the issueâ.

âHowever, it is submitted that there can be no peace without justice,â the petition said.

A five-judge bench led by former chief justice Ranjan Gogoi had last month cleared the construction of Ram Mandir in its verdict in favour of Ram Lalla Virajman. The constitution bench had also directed the Centre to allocate five-acre land to the Sunni Central Waqf Board in Ayodhya to compensate them for the wrongs committed including 1992 demolition of the mosque.

The Sunni Board, which was awarded the land, has decided against filing an appeal against the verdict. It has, however, put off a decision on accepting the land and has declared that the board will discuss this part of the ruling only after the government makes an offer.

The boardâs decision, however, doesnât make much of a difference since many other Muslim litigants in the title suit including Rashidi had indicated they would challenge the top court ruling.

The petition clarified that it was seeking a review of the verdict on 14 points, not the judgment in its entirety. It argued that the court could not treat the deity as a perpetual minor for the purposes of limitation, could not correct historical wrongs and could not treat historical accounts as conclusive. It also stressed that a finding on title could not be based on archaeological findings.