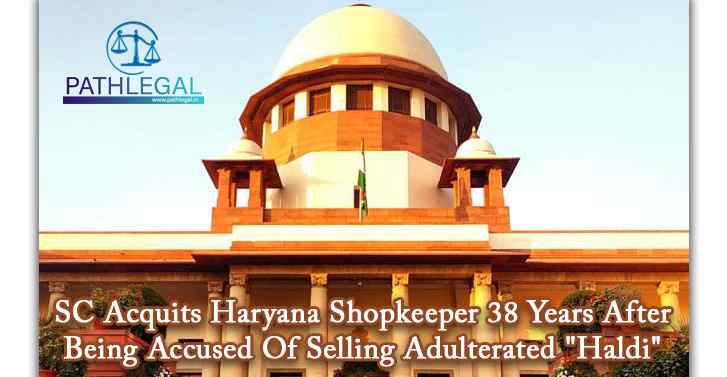 NEW DELHI: Nearly four decades after being accused of selling adulterated haldi,Â the Supreme CourtÂ on Thursday acquitted a Haryana shopkeeper, setting aside the high court order convicting him under the Prevention of Food Adulteration Act.

Prem Chand, now 76 years old, was charged after sample of haldi (turmeric) taken from his small shop in a village in Sonepat district in 1982 by a food inspector along with a medical officer was found adulterated. The report of the public analyst, prepared after examining the sample, revealed that it contained four living mealworms and two live weevils. The trial court acquitted him in 1995 after holding proceedings for almost 13 years.

But 14 years later,Â PunjabÂ and Haryana High Court quashed the lower court order in 2009 and held him guilty of selling adulterated food items. The HC sentenced Chand to undergo imprisonment for six months and pay a fine of Rs 2,000.

Chand then approached the Supreme Court through lawyers Vidisha Swarup and Neelmani Pant against the HC order. Referring to the public analystâs report, his lawyer contended that it was not mentioned anywhere that the sample was either insect-infested or was unfit for human consumption and the HC erred in convicting him.

Allowing the appeal of Chand, a bench of Justices N V Ramana, Surya Kant andÂ Krishna MurariÂ said the public analyst took 17 days to prepare the report and tampering of the sample could not be ruled out.
âWe note that the cross-examination of the medical officer reveals that he did not find any weevils/worms in the sample on seeing it with the naked eye... Although the sample was received in the office of the public analyst on August 20, 1982, and the report was finalised on September 7 after the delay of 18 days. There is no evidence that the samples did not tamper within the intervening period, therefore the benefit of doubt accrues in favour of the accused." the court said.

"Moreover, the report of the public analyst does not mention that the sample was either insect-infested or was unfit for human consumption in the absence of such an opinion, the prosecution has failed to establish the requirements of Section 2 (1a)(f) of the Act," the bench said while quashing the HC order.