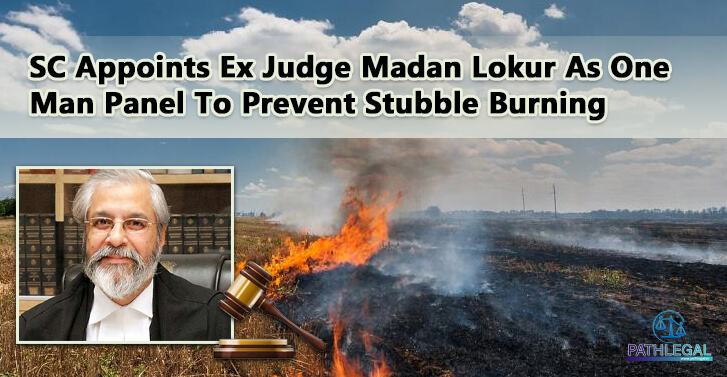 Brushing aside objections by the Centre, the Supreme Court on Friday appointed its retired judge Madan B Lokur as the one-man committee to curb crop stubble burning in Punjab, Haryana and west UP, which chokes Delhi-NCR.

Describing it as an emergency measure, a bench headed by Chief Justice of India SA Bobde said it wanted to step in before the problem of bad air and smog gets unmanageable.

The suggestion to appoint the outspoken Justice Lokur came from senior advocate Vikas Singh, who represented teen petitioner Aditya Dubey. His petition had sought the courtâs intervention to ensure people get clean air as their fundamental right.

While officiating as a judge, Justice Lokur had headed the SCâs social justice bench and heard matters on environmental pollution.

Appearing for the Centre, Additional Solicitor General Aishwarya Bhati sought to stop the appointment, saying the bench should rather hear the matter along with a batch of similar pleas in the 1985 MC Mehta PIL. But the CJI rejected it.Â

At the fag end, Solicitor General Tushar Mehta made a last ditch attempt to spike the appointment, but the bench stayed firm, pointing out that Justice Lokur was not being given any extraordinary powers.

Justice Lokur was among the four top SC judges who held an unprecedented press meet in 2018 criticising the then CJI Dipak Misra. Even after his retirement, he remained vocal. His latest swipe was on the abuse of sedition law, where he said freedom of speech is being mauled through twisting and turning of the law.

Cadets of the NCC, NSS and Bharat Scouts and Guides can be deployed for assisting in the monitoring of stubble burning, the bench said.