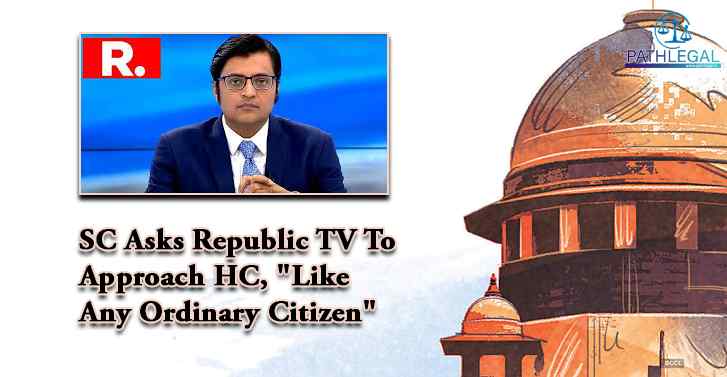 The Supreme Court on Thursday asked Republic TV to approach the Bombay high court with its grievance against Mumbai policeâs probe into the alleged TRP scam but disapproved theÂ Mumbai police commissionerÂ resorting to press conferences on the issue.

A bench of Justices D Y Chandrachud,Â Indu MalhotraÂ andÂ Indira BanerjeeÂ told the TV channelâs counsel Harish Salve that his client, âlike any ordinary citizen of the countryâ, must approach the jurisdictional high court concerned to seek redress of grievances against any police investigation. âYour client has an office at Worli and it would be better if they walked toÂ Flora FountainÂ (the location of the high court) which is nearby rather than invoking the jurisdiction of the Supreme Court. We must have faith in our high courts,â it said.

When Salve said the investigation was motivated, the bench said: âWe are concerned about the way the Mumbai police commissioner is giving interviewsâ. Salve agreed to withdraw the petition with liberty to move the HC. The SC granted liberty and dismissed the petition as withdrawn.

Even before the SC took up the case for hearing, Mumbai police had filed a preliminary reply to Republic TVâs petition questioning the âmotivated investigationâ into the TRP scam.

In response to the petition filed byÂ ARG Outlier Media, it said any investigation into an alleged crime by the investigating agency cannot be cited as violation of right to freedom of speech as sought to be done by the petitioner to âsidestep, thwart and prevent any investigation by the competent agency into alleged fudging of TRP ratingsâ.

The city police said several TV channels which had been summoned were cooperating with the probe and had not raised any grievance with regard to the investigation. It said the petitionerâs demand for transfer of probe to the CBI was misconceived.

The police accused Republic TVâs main anchor of âcontacting various witnesses who have been summoned by the police and discussing and/or debating the contents of their statements on the TV programmesâ. It said, âPetitioners are directly interfering and intimidating the witnesses by issuing news releases. The FIR is being converted into a media spectacle. Such media trial is antithetical to the process of free and fair investigation as also administration of justiceâ.