SC Rulling On Factors To Be Considered In Rejection Of Plaint 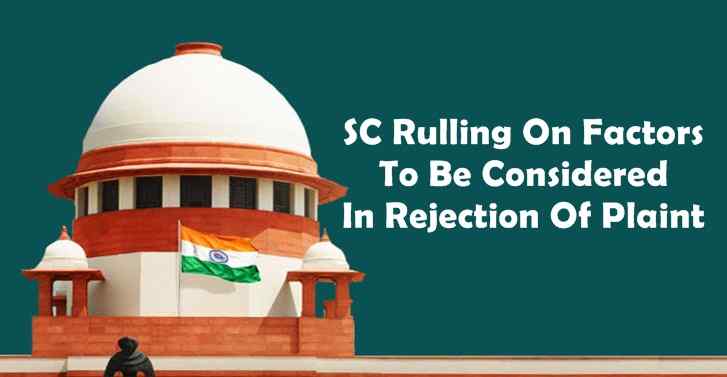 The entirety of the averments in the plaint has to be taken into account while considering a plea seeking rejection of plaint, the Supreme Court has reiterated. In appeal shaukathussain Â Mohammed Â Patel Â VS. Khatunben Mohammed Bhai Polara the bench of Justice Uday Umesh Lalit and Justice R. Subhash Reddy noted that when the plaint is read in entirety, it is clear that the plaintiff had pleaded that the information in respect of the transaction came to the knowledge only in the year 2013-2014 and that the plaintiff was always in possession of the property. In the entirety of the circumstances, as pleaded in the plaint, the issues raised in the matter were certainly required to be considered on merits, the bench said while setting aside the High Court order.

There cannot be any compartmentalization, dissection, segregation, and inversions of the language of various paragraphs in the plaint. If such a course is adopted it would run counter to the cardinal canon of interpretation according to which a pleading has to be read as a whole to ascertain its true import. It is not permissible to cull out a sentence or a passage and to read it out of the context in isolation. Although it is the substance and not merely the form that has to be looked into, the pleading has to be construed as it stands without addition or subtraction or words or change of its apparent grammatical sense. The intention of the party concerned is to be gathered primarily from the tenor and terms of his pleadings taken as a whole. At the same time, it should be borne in mind that no pedantic approach should be adopted to defeat justice on hair-splitting technicalities. Read more legal judgment in Indiaâ¦.. TO KNOW MORE ABOUT DOCUMENTS RELIED ON IN PLAINT TO KNOW ABOUT HOW TO PREPARE POWERFUL PLEADINGS?