SC: No Merit In 'Charging Interest On Interest' For Deferred Payments During Moratorium 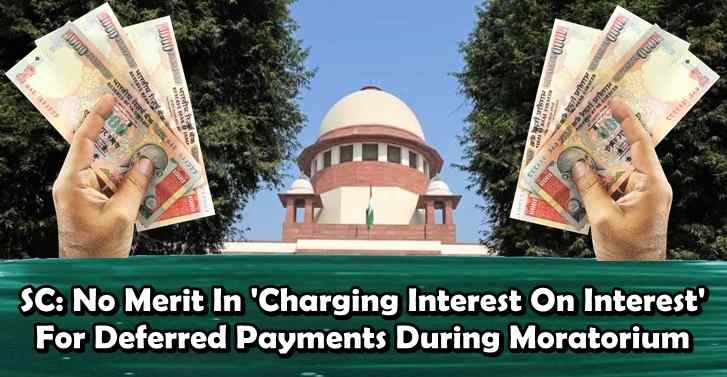 New Delhi, Jun 17 (PTI) The Supreme Court Wednesday said there is "no merit in charging interest on interest" for deferred loan payment installments during the moratorium period announced in wake of the COVID-19 pandemic.

The lawyer also said the circular of the Reserve Bank of India of March 27, granted moratorium but no substantial relief has been given to the borrowers.Noting the submission, the apex court said, âIt is submitted that if moratorium is being granted for a period of three months, the entire amount payable including principal and interest should not be charged during moratorium period. Secondly, at least the demand of interest on interest should not be made and these reliefs can be extended by the Central Government and the Reserve Bank of India.âThe bench, prima facie, was also of the same view but granted more time to the Centre and the RBI to have a re-look of the matter and posted it for hearing in the first week of August.

Gajendra Sharma, in his plea, has sought a direction to declare the portion of the RBI's March 27 notification "as ultra vires to the extent it charges interest on the loan amount during the moratorium period, which created hardship to him being a borrower and created hindrance and obstruction in 'right to life' guaranteed by Article 21 of the Constitution..Solicitor General Tushar Mehta, appearing for the Centre and the Reserve Bank of India, told the apex court that waiving the interest completely will not be easy for banks as they have to pay interest to their depositors. "There are 133 lakh crore rupees in deposits with banks and interest has to be paid on them and the waiver will have a cascading effect," Mehta told the bench. The bench adjourned the hearing for allowing the Centre and the RBI to review the situation and asked the Indian Banks Association to examine whether they can bring new guidelines in the meantime on the issue of loan moratorium.

The RBI said the March 27 circular announcing moratorium was later modified on April 17 and May 23 by which the moratorium period was extended by another three months that is from June 1 to August 31, 2020 on payment of all installments in respect of term loans (including agricultural term loans, retail and crop loans). "It is submitted that regulatory dispensations permitted by the Reserve Bank of India vide the aforesaid circulars dated March 27, 2020 which subsequently stood modified on April 17, 2020 and May 23, 2020 were with the objective of mitigating the burden of debt servicing brought about by disruptions on account of COVID-19 pandemic and to ensure the continuity of viable businesses."Therefore, the regulatory package is, in its essence, in the nature of a moratorium/deferment and cannot be construed to be a waiver," it said. PTI SJK ABA MNL MNL RKS