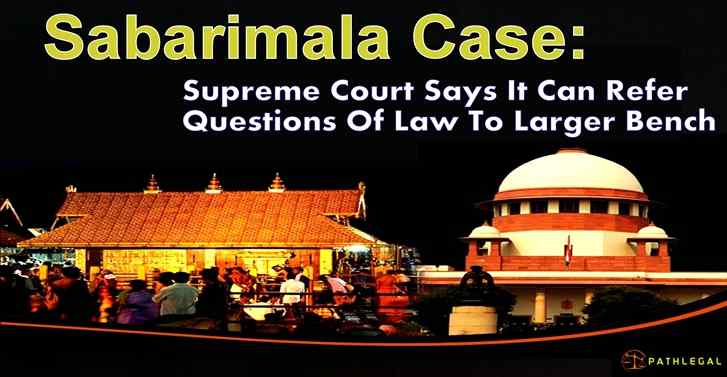 TheÂ Supreme CourtÂ on Monday held that its five-judge bench can refer questions of law to a larger bench while exercising its limited power under review jurisdiction in the Sabarimala case.

A bench headed by Chief Justice S A Bobde framed seven questions to be heard by a nine-judge Constitutional bench on issues relating to freedom of religion under the ConstitutionÂ and faith.

The court proposes to hear on a day-to-day basis from February 17 questions framed on scope of religious freedom in various religions.

The bench said its nine-judge bench will deal with the right to freedom of religion under Article 25Â of the Constitution and its interplay with the right of various religious denominations.

It will also deal with the extent of judicial review with regard to religious practices and the meaning of "sections of Hindus" occurring in article 25 (2)(b) of the Constitution.

The Supreme Court will also deal with the power of a person, who does not belong to a particular religion or sect of a religion, to question the religious beliefs of that religion by filing a PIL.

The apex court asked the lawyers representing various parties to give information as to who they are representing and the bench then would allot time to them for advancing arguments.

It said that Solicitor General Tushar Mehta, representing the Centre, would open the arguments followed by senior advocate K Parasaran on February 17.

Besides the Sabarimala case, the verdict had also referred issues of entry of Muslim women into mosques and dargahs and of Parsi women, married to non-Parsi men, being barred from the holy fire place of an Agiary, to the larger bench.

A five-judge bench, by a majority of 3:2 on November 14 last year, had referred to a larger bench the issue of discrimination against women at various religions' places of worship.

It said the larger bench will have to evolve a judicial policy to do "substantial and complete justice" in matters of freedom of religion, such as restrictions on the entry of Muslim and Parsi women into their respective places of worship.

A majority verdict by the then Chief Justice Ranjan Gogoi and Justices A M Khanwilkar and Indu Malhotra decided to keep the pleas seeking a review of its decision regarding entry of women into the shrine pending and said restrictions on women at religious places were not limited to Sabarimala alone and were prevalent in other religions also.

By a 4:1 majority verdict, the apex court had in September 2018 lifted the ban that prevented women and girls between the age of 10 and 50 years from entering the famous Ayyappa shrine in Sabarimala and held that the centuries-old Hindu religious practice was illegal and unconstitutional.