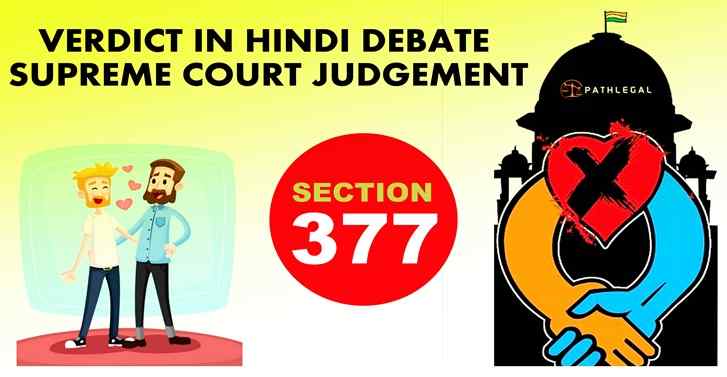 6th September 2018 is a historic day for our country. On this day, the Supreme Court of India legalized homosexuality in our country. India joins 125 other countries where people of the same gender may have physical relations with each other.Â

2. But now theÂ Supreme Court of India has decriminalized consensual intercourse between people of the same sex and read down Section 377 thus providing a huge boost for the LGBTQ community. But, till now there are no provisions made for the marriage between homosexuals.Â

3. The Supreme CourtÂ based its judgmentÂ on the recognition that sexual orientation is a natural and inherent biological phenomenon and it does not depend on the matter of choice of a person.Â

4. As per Section 377,Â it was a punishable act to have any sexual intercourse against the order of nature. This rule was first established under British rule in 1861. Before that, there was no law governing sexual intercourse in India.Â

5. It is to be noted thatÂ the Supreme Court has not legalized any kind of sexual relations between humans and animals, rightfully protecting them against any harassment by humans.Â

6. The Chief Justice of India saidÂ that the identity of an individual is the most important aspect of his personality. This identity can be anything from their religion to sexual orientation. If we destroy an individual's identity, then this is unfair to them, their dignity and against basic fundamental rights.Â

7. Earlier homosexuals sufferedÂ a lot of harassment by different groups and sometimes even by the law enforcers and people with higher authority. These people even after suffering a lot of harassment were afraid to file any complaint as they knew if they will be exposed as homosexuals they will be further punished. These kinds of situations are against the basic rights of a human being and keeping all these things into account the Supreme Court took this historic decision.Â

8. IPC Section 377Â was against the fundamentals rights guaranteed by Articles 14,15 and 21, which protects the sexual orientation of each individual on an even platform.Â

9. The Supreme Court of IndiaÂ made the following judgment on this case;Â

3.Â Â Â  LGBTs in India are entitled to all constitutional rights, including the liberties protected by the Indian Constitution.Â

10. Earlier the Delhi High CourtÂ in July 2009 decriminalized homosexuality only for the Supreme Court to revoke the order in December 2012.

12. Soon after,Â a group of LGBT rights activists approach the Supreme Court with a petition claiming their rights to sexuality, sexual autonomy, choice of sexual partner, life, privacy, dignity, and equality among others are violated by Section 377. The Supreme Court agreed to reconsider the issue and finally after a long and bumpy journey Supreme Court decriminalizes Homosexuality marking the beginning of a new era for our country.