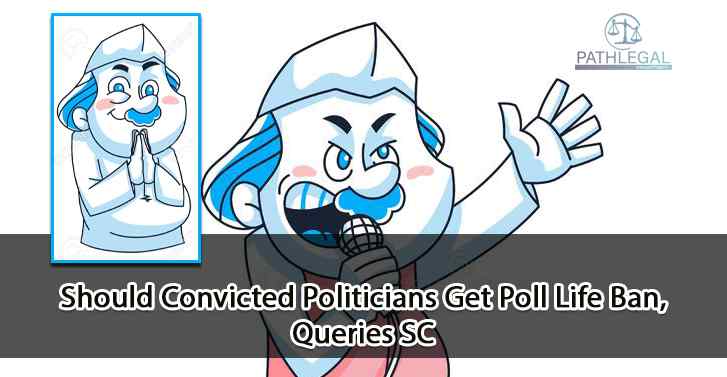 On course to ensure speedy trials in 4,442Â criminal casesÂ pending against former and sitting MPs and MLAs across states,Â the Supreme CourtÂ on Thursday asked the Centre to respond to a new prayer in a pending PIL seeking a life ban on politicians convicted of heinous offence from contest elections.

Appearing for advocate-cum-petitioner Ashwini Upadhyay, senior advocateÂ Vikas SinghÂ said there was a long list of serious crimes in which conviction of a public servant led to his disqualification from holding a government job for his lifetime. âWhy canât the same yardstick be applied to politicians who, under the Representation of People Act, get away lightly by getting debarred from contesting elections for a period of six years after serving the jail term?â he asked.

A bench of Justices N V Ramana, Surya Kant and Hrishikesh Roy sought the Centreâs response in six weeks on the petition, in which the court had sought reports from all high courts on the cases pending trial against sitting and former legislators. Amicus curiae Vijay Hansaria andÂ advocateÂ Sneha Kalita had compiled the data and submitted to the court.

The bench said in its order, âEven though we had granted time to all HCs to furnish the requisite information, only the HCs of Karnataka, Madhya Pradesh, Tamil Nadu, Delhi, Jharkhand and Gauhati have done so... We grant two days time to the remaining HCs to provide requisite information of pending cases and their stagesâ.

The bench noticed a peculiar case, a 1983 murder case of a doctor in Tarn Taran, Punjab, in which former Akali Dal MLA Virsa Singh Valtoha is an accused. The trial court framed charges against the politician after 36 years in 2019 and the case is a long way from completion. It asked the HCs to furnish all the details by Sunday and posted the matter for further hearing on September 16.

Hansaria said though the SC had directed states to set up special courts to fast-track trial in these pending cases, the states of Andhra Pradesh, Madhya Pradesh, Tamil Nadu, Telangana and West Bengal had set up just one special court each for such cases.

The amicus said one of the reasons for delay in trial was that the accused exerted money and muscle power to influence witnesses who turned hostile and suggested that the court direct authorities to strictly implement witness protection measures. Moreover, there are many cases where non-bailable arrest warrants issued by trial courts to ensure presence of the accused legislators are not executed.