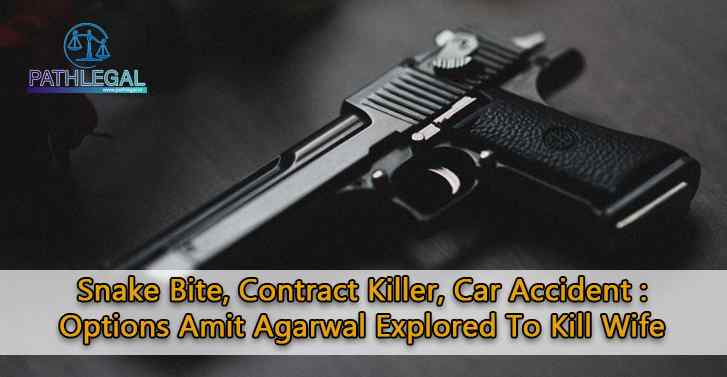 From snake bite to hiring a contract killer to staging a car accident - Amit Agarwal - the 42-year-old chartered accountant, had explored various options to kill his wife for the past six months, the Kolkata Police said Wednesday after going through a 67-page-suicideÂ note that he left behind.

Agarwal finally killed his wife Shilpi allegedly by strangling her in her Bengaluru flat on Sunday and then flew down to Kolkata on Monday with this 10-year-old son. He called a friend to the Kolkata airport and asked him to take his son to his elder brotherâ house in the cityâs north.

In the evening, Agarwal went to his in-laws place and shot his 65-year-old mother-in-law Lalita Dhandania before turning the gun on himself. His father-in-law Subhash Dhandania, 70, managed to rush out of the flat to save his life.

âThe 67-page suicide note, of which 66 pages are typed, was titled âMahabharat of my lifeâ,â said a senior official of the Kolkata Policeâs detective department.

Investigators have come to know from the note that Agarwal, used to stay in a separate flat in Bengaluru, as a divorce suit was going on over the past two years. From Bengaluru he had had gone to Bihar to explore the option of hiring a contract killer and to Tamil Nadu to look for snakes before the lockdown started.

âIn the suicide note he has mentioned how he had explored various options from snake bites to car accident to kill his wife. He had even thought of contracting a supari killer. But later he thought of doing the job himself as he could not trust anyone,â said a police officer.

âFrom whatever we have gathered so far, Agarwal seems to have planned the murder more than six months back. We think he had purchased the pistol during his earlier visit to Kolkata. He had come to Kolkata at least thrice this year before the lockdown,â said a senior officer.

Police have come to know that after taking a cab from the airport he got down at a place, which was around 500m from his in-lawsâ place.

âHe had a second flat very close to his in-laws. After getting down from the cab he first went to that flat before walking up to his in-lawsâ flat. So it seems that he might have purchased the weapon during oen of his earlier visits and hid it in his flat,â said a senior official.

Police suspect that Agarwal had plans to kill all his in-laws including his father-in-law and brother-in-law. He had even called his brother-in-law Vineet Dhandania, who stays in Gurugram, to come down to Kolkata. Vineet, however, failed to turn up.

âBengaluru police have already found Shilpiâs body from her flat. She was probably strangulated. There were signs of scuffle in the Mahadevapura flat. Preliminary investigation suggests that Agarwal first kept his ten-year-old son in the apartmentâs guest room and went up to his wifeâs flat. When his wife opened the door he forced his way and killed her. Later he spent the night in the guest room.