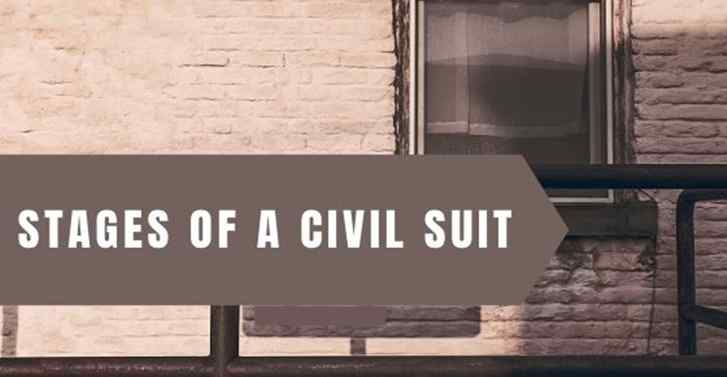 The Civil Suit is basically a Dispute which arises between two people or two organizations wherein a subject for dispute is limited to monetary transaction and dispute related to immovable property. The Civil Suit, if it is personal, is nature than it is governed under Civil Procedure Code and if it is related to the business transactions than Commercial Court Act also plays a great role to set out the procedure. The Parties in the Civil Suit are addressed as Plaintiff and Defendant. The Plaintiff will present the facts of the case and he might ask for the following things in the Plaint:- Damages Injunction Judgment Any other particular which may differ from matter to matter.

Plaint:Â The document in which the fact of the case is mentioned that the document is known as Plaint in the Legal world. The entire Civil Suit is based on Plaint and the Plaint is a starting point or the starting stage for all the Civil Suit. Order VII deals with the contents of Plaint and some of the points mentioned under Order VII are mentioned herein below:- Particulars Name of the Court Details of the Party Facts of the Dispute involved between the party Relief Sort Jurisdiction The Documents on which the party is relying upon. Summons After a Plaint is filed the Court may either accept the Plaint or they may reject the Plaint if the Plaint is accepted the Court may call the Party i.e. Defendant against whom the dispute is filed and Court calls party by issuing Summon. Defendant to whom the summons is issued may appear in person or through the legal representative. If the Summons are addressed within the jurisdiction of the Court than the same is addressed under Section 27 of the Code and if the Defendant doesnât reside in the jurisdiction of the Court but the same resides in the same Country than the Summons are addressed under Section 28 of the Code but if the Defendant is residing outside the Country than the Summons are addressed under Section 29 of the Code.

The Summons is also addressed when Plaintiff or Defendants want to produce a witness in the Court, the procedure relating for calling for witness is mentioned under Section 31 of the Code. The procedure for the Service of Summons is mentioned under Order V of the Code. The appearance of the Party to whom summon is addressed needs to be present before the concerned court and if the person failed to appear before the concerned Court than as per Order V rule 20 an Ex-parte order is passed by the Concerned Court. If both parties are not present on the concerned date than the court after giving due chance ay dismiss the matter. Interlocutory Proceeding Everyone knows that Suit is a Long process as it has many steps before passing Judgment so before starting the stages of Suit sometime the Court has to intervene in the matter to maintain the position as it prevailed. Such Intervention is known as the âSTATUS QUOâ. The Plaintiff can ask for Status Quo order by filing Notice of Motion in the City Civil Court or by filling Interim Application in respective High Court. Following intervention matter are entertained by the Civil Court:- Temporary Injunction (order 39) Appointment of Court Receiver (order 40) Appointment of Court Commissioner(order 26) Arrest and Attachment before Judgment (order 38) Written Statement In the simple language Written Statement is a Document in which the Defendant mentioned his/her side of facts of the case and mention his defense to the Plaint. Order VIII of the code deal with Written Statement.

Hearing and Cross-Examination of the Witness (order XVII) After the Production of Document, the next stage of the civil suit is hearing of suits and examination of witnesses commence. First right to begin is of plaintiff. The plaintiff has to submit the evidence that was earlier marked if any evidence was not marked earlier then it will not be considered by the court. And the defendantâs advocate will cross-examine the plaintiff and also to the witnesses who are from the plaintiff's side. And the defendant also presents his side of the story supported by his witnesses and evidence from his side and the plaintiff advocate also cross-examined the defendant. Argument As soon as the stage of the hearing of suits and examination of witnesses is over then the suit is kept for the next stage i.e. argument. Once the evidence has been submitted and cross-examination is conducted by both parties, then both sides are allowed to present a summary of the case and evidence to the judge in the final session. Judgment After the concerned court has heard the matter the Court will pass Judgment/Decree.

The provision related to Judgment and Decree is in Section 33 read with Order XX of the Code. Appeal, Review, and Revision After the Judgment is pronounced and if the concerned party are not satisfied with the Judgment/Decree passed than they can either apply for Review (Section 114 read with Order XLVII) within Thirty Days from the date of pronouncement of Judgment/ Decree, or the aggrieved party can apply for Revision (Section 115) to the higher court within thirty days of pronouncement of Judgment, or the aggrieved party can also apply for Appeal (section 96 to 110 along with Order XLI to XLV) to the Higher Court within 60 or 90 days from the pronouncement of the Judgment/ Decree. Execution of the Decree In this stage, decree-holder compels the judgment-debtor to out the mandate of the decree or decree or order as the case may be. It is the process by which a decree-holder recovers the fruits of the judgment. The execution is complete when judgment creditor or decree-holder gets money or other thing awarded to him by judgment, decree, or order.