Stages of A Crime Under Indian Penal Code 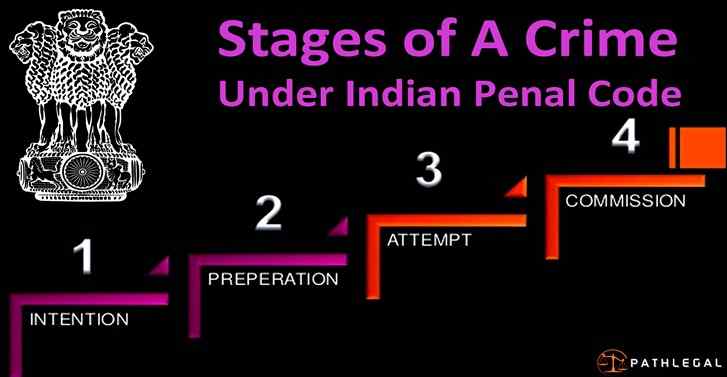 In every crime, there are four stages. First is the intention to commit it; second is when the offender makes preparations to commit it; the third stage is when he attempts to commit it and if the third stage is successful then finally the actual commission of the offence. If the attempt fails, the crime is not complete but the law punishes the person attempting the act. An âattemptâ is made punishable, because every attempt, although fails must create alarm, which, of itself, is an injury and the moral guilt of the offender is the same as if he had succeeded.

Section 511of IPC read as, Punishment for attempting to commit offences punishable with imprisonment for life or other imprisonments â

An attempt is a direct movement towards the commission after the preparations are made. An attempt is an intentional preparatory action which fails in an object because of circumstances independent of the person who seeks its accomplishment. When a man does an intentional act with a view to attaining a certain end and fails in his object through some circumstances independent of his own will, then that man has attempted to effect the object at which he aimed.

The test for determining whether the acts constitute attempt or preparation is whether the over acts already done are such that if the offender changes his mind and does not proceed further in its progress, the acts already done would be completely harmless. But where the thing is done is such that if not prevented by any extraneous cause, would fructify into the commission of an offence it would amount to an attempt to commit that offence. An accused committed an offence criminal lawyers in India to help to release them from the punishment.Â

The Supreme Court in State of Maharashtra v.Mohd.Yakub, AIR 1980 SC 1111, held that the test applied in Malkiat Singhâs case should be understood with reference to the facts of the case. In this case, customs officers received information that a truck and a jeep containing silver with the intention of smuggling it out of the country, we're heading towards the seashore. While the truck was being unloaded at the seashore, the customs officers arrested the accused. The court held that the accused had made all the preparations and it is only because of the intervention of custom officers that they could not succeed in their attempt. The accused were accordingly held guilty under section 511.