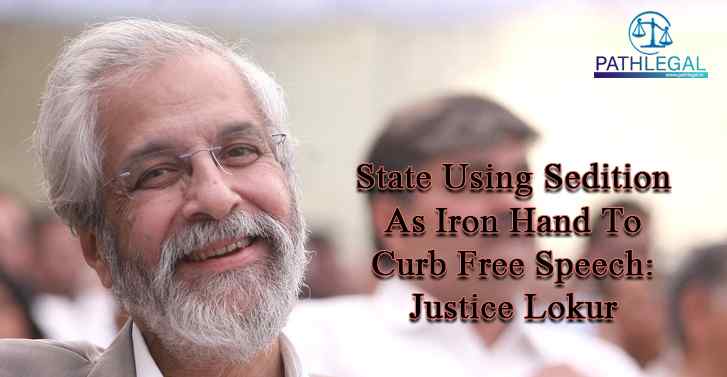 Addressing a virtual discussion on the âFreedom of speech and judiciaryâ, in the context of lawyer Prashant Bhushan depositing a fine of Re 1 in a contempt of court case, he was quoted by Live Law as saying, âState is using an iron hand to curb free speech. Suddenly you have a lot of cases charging people with sedition. Common citizen who say something are charged with sedition. Already 70 cases of sedition this year.â

Citing the example of Dr Kafeel Khan, who was recently released from jail after the Allahabad High Court quashed his charges under the NSA, Justice Lokur said his speech at a protest against the new Citizenship Act was misread. âThe Court said his speech was promoting national integration and unity,â he added.

Justice Lokur said another method by which the State curbs free speech is by crackdown on critical opinions by chargingÂ  as spreading fake news. He cited examples of journalists reporting about Covid-19 cases, lack of ventilators etc. with fake news provisions.

âAnother method is the misreading of the statements to attribute motives. This happened in the case of Prashant Bhushan, Justice M B Lokur says. âI believe he had no intention to break the judiciary. But his statements were misread,â Justice Lokur said.

He further said students and activists are put under jails by misreading their dissenting voices to invoke UAPA against them.

The former SC judge expressed concern about preventive detention being used rampantly. âOn the other hand, you have people who talk about violence, about breaking up things â nothing happens to them.â

Noting that over 3 crore cases are pending before the courts, Justice Lokur also said that the judiciary needs to prioritize its concerns and there is a need to increase transparency within the judiciary.