Supreme Court Convicted 12 Persons For The Murder Of Haren Pandya 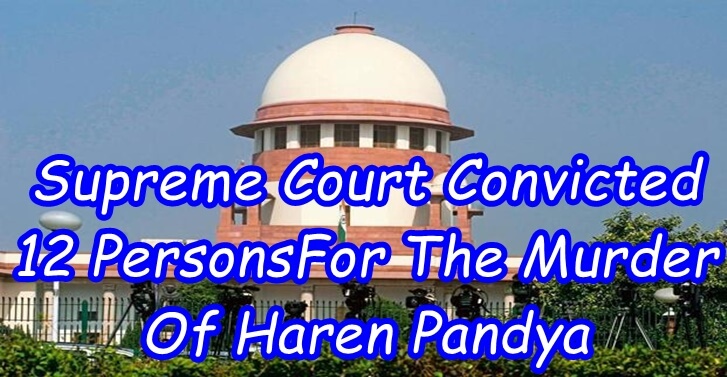 The Supreme Court on Friday restored a trial court order convicting 12 persons in the murder of former Gujarat Home Minister Haren Pandya in 2003.Â Pandya was shot dead in Ahmedabad on March 26, 2003. According to the CBI, Pandya was killed to avenge the 2002 communal riots in the state.

A bench headed by Justice Arun Mishra upheld the Gujarat trial court verdict in the case, setting aside the 2011 Gujarat High Court order that acquitted the 12 accused of the murder charges.

The CBI had appealed against the Gujarat High Court judgement. The Supreme Court in January reserved its verdict on the appeal.Â The top court dismissed a petition filed by the Centre for Public Interest Litigation (CPIL) seeking a fresh probe into the case and slapped a fine of Rs 50,000 on the NGO.

Citing the testimony of Azam Khan, a witness in the Sohrabuddin Sheikh fake encounter case in which BJP President Amit Shah was arrested before being absolved of all charges, the CPIL contended that a fresh probe was imperative in the case.

The petition said that Khan during his examination before the trial court on November 3, 2018, claimed that "Sohrabuddin had told him that a contract to kill Haren Pandya had been given to him by a Gujarat cadre IPS officer, DG Vanzara, and that Sohrabuddin's associate Tulsiram Prajapati along with one Naeem and Shahid Rampuri had murdered Haren Pandya in pursuance of that contract."