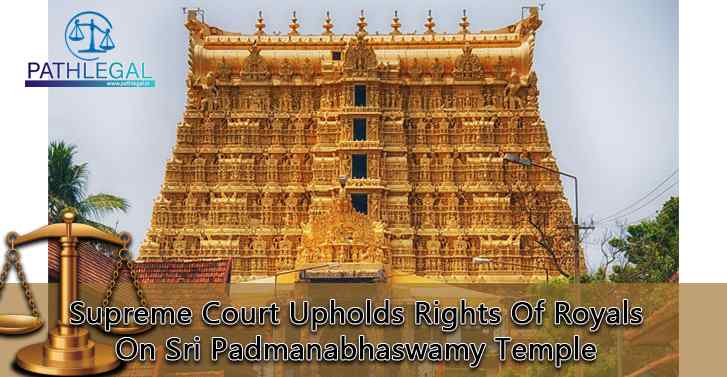 The Supreme Court on Monday ruled that the Travancore royal family has rights to maintain and manage the Sri Padmanabhaswamy temple in Kerala, allowing the appeal filed by the Maharajah of the royal family challenging a 2011 Kerala high court judgment that had given these rights to the Kerala government.

A two-judge bench of justices UU Lalit and Indu Malhotra held that the royal familyâs Shebaitship â the right to maintain and manage the temple and the deity â does not come to an end with the death of the ruler, who signed the instrument of accession with the Indian government in 1949 by which the erstwhile princely state of Travancore merged with the Indian union.

âWe hold that the death of Sree Chithira Thirunal Balarama Varma, who had signed the covenant, would not in any way affect the Shebaitship of the temple held by the royal family of Travancore,â the court ruled.

The court also accepted the suggestion made by the royal family on the constitution of a five-member administrative committee which shall administer the temple from now on. The administrative committee will consist of the district judge of Thiruvananthapuram, one nominee of the Maharajah of the royal family, one nominee of the Kerala government, one member nominated by the ministry of culture (Government of India), and the chief thantri (priest) of the temple. All the members of the committee will be Hindus.

The Kerala high court held in January 2011 that after Chithira Thirunal Balarama Varma, the ruler who signed agreement of the accession with the Indian government, died in 1991, the temple stood vested with the Kerala government. The agreement of accession provided that the administration of the Padmanabhaswamy temple shall be conducted, subject to the control and supervision of the ruler of Travancore, by an executive officer appointed by the ruler.

The high court, in its order, held that ârulerâ is not a status that can be achieved through succession.

But the Supreme Courtâs ruling on Monday means that the 1949 agreement between the ruler of the princely state and the Government of India on the Shebait rights of the temple would be enforceable, though payments and other privileges accorded by the Government of India to royal families of erstwhile princely states for joining the Indian union at the time of Independence were abolished in 1971.

The court arrived at this conclusion based on the existence of another law, the Travancore-Cochin Hindu Religious Institutions Act (TC Act), which was enacted in 1950 by the state government to make a provision for the administration, supervision and control of Hindu Religious Endowments. Section 18 of the TC Act provides that the Sri Padmanabhaswamy temple stands vested in the ruler of Travancore. As long as the TC Act exists, the Shebait rights of the royal family will continue and the abolition of the rights and privileges of the royal family by the 26th amendment of the Constitution will not impact the same, the court held. âBroadly the court has said that as long as the TC Act is valid, under Section 18(2), the rights of a ruler in Kerala are preserved despite the 26th constitutional amendment, which had abolished privy purse in India,â said Supreme Court advocate Vipin Nair.

In the new arrangement, as prescribed by the court, on all policy matters related to the temple, the trustee (the Maharajah) will be guided by a three-member advisory committee headed by a retired judge of the Kerala high court. This committee will have an eminent person nominated by the Maharaja and a reputed chartered accountant as its members.

The two committees should ensure that all treasures and properties endowed to Padmanabhaswamy and those belonging to the temple are preserved, the court said. They should also ensure that all rituals and religious practices are performed in accordance with the instructions and guidance of the chief thantri of the temple and according to custom and traditions.

The court said that the income accruing to the temple, as well as the offerings made by the worshippers, should be expended to improve the facilities for the worshippers and or such religious and charitable purposes as the advisory committee may consider appropriate. It also asked for an audit of the temple for the last 25 years.

The temple, located in the state capital of Thiruvananthapuram, came under media glare in 2011 when a vast treasure was discovered in its vaults, known as âKallaraâ in Malayalam. The vaults were opened pursuant to a May 2011 order of the apex court.

It was estimated that the intrinsic value of the treasure in five of the six vaults which were opened amounted to more than ~90,000 crore. One of the vaults, Kallara B, was not opened on various grounds, including a superstition that there was a curse on it. During the hearing of the case before the Supreme Court, the Travancore royal family opposed the opening of Kallara B stating that it is a âsecret and sacredâ place and its sanctity needs to be preserved. The opening was later kept in abeyance by the apex court.

The court on Monday directed that the administrative and advisory committees shall decide whether Kallara B should be opened to make an inventory.

The original construction date of the temple is disputed but most historians agree that it was reconstructed and a new idol installed by Anizham Thirunal Marthandavarma, who established the modern Travancore state.