Supreme Court: Bail Is Rule And Jail Is Exception 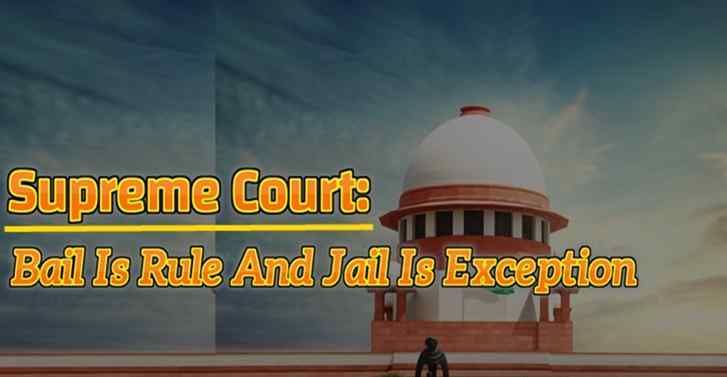 Bail is defined as money or some form of property which is deposited in a court. It is a security used for the release of a suspect who has been arrested from custody and there will be a condition that the suspect will return for their trial and in the court appearances.Â The supreme court of India had reminded thatÂ  âbail is rule and jail is an exceptionâ while granting bail to a person whose bail application has been rejected by HC. The court had urged the judges to show a human attitude while passing these orders or before sending them to jail. The court observed the case and found out that the accused was not arrested after registration of FIR nor filing of the charge sheet. Thus apex court finally granted the bail to the person.

The supreme court bench led by Justice Madan B Lokur stated that âa fundamental postulate of criminal jurisprudence is the presumption of innocenceâ and thus courts should take certain relevant factors into account before sending an accused behind bars.â

The bench also held that â Another important facet of our criminal jurisprudence is that the grant of bail is the general rule and putting a person in jail or in a prison or in a correction home is an exception. Unfortunately, some of these basic principles appear to have been lost sight of with the result that more and more persons are being incarcerated and for longer periods. This does not do any good to our criminal jurisprudence or to our society. To put it shortly, a humane attitude is required to be adopted by a judge while dealing with an application for remanding a suspect or an accused person to police custody or judicial custody. The requirements of Article 21 (right to live with dignity) of the Constitution and the fact that there is enormous overcrowding in prisons, leading to social and other problems. The grant or refusal of bail is entirely within the discretion of the judge hearing the matter and though that discretion is unfettered, it must be exercised judiciously and in a humane manner and compassionately.â

The court further mentioned that âConditions for the grant of bail ought not to be so strict as to be incapable of compliance, thereby making the grant of bail illusory. That being the case, the trial judge, as well as the High Court ought to have judiciously exercised discretion and granted bail to the appellant. It is nobodyâs case that the appellant is a shady character and there is nothing on record to indicate that the appellant had earlier been involved in any unacceptable activity, let alone any alleged illegal activity. Thus bail must be granted.â This is an important ruling for lawyers in India.