Top 12 Judgments Where Husbands Won Divorce On Grounds Of Cruelty 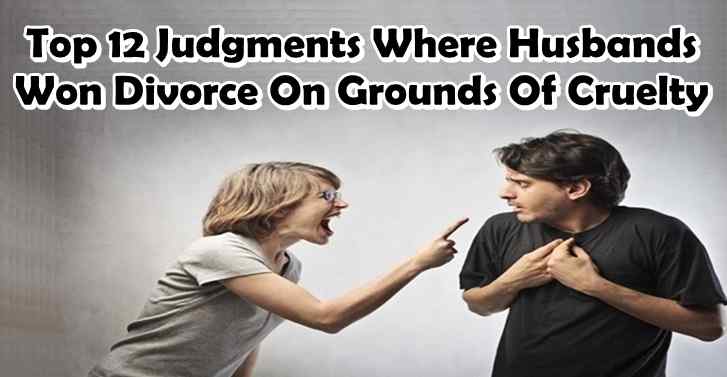 Law Point:Â Hindu Marriage Act, 1955 â-Section 13 (1)(ia) â-Cruelty â- Petitioner- wife stayed for 4-5 days only after marriageâ- No serious attempts to resolver issues by her family members or wife â- The way the matrimonial relationship has been neglected shows her indifference to the sacred institution of marriageâ- the cumulative effect of evidence on record established sustained attitude of causing humiliation and torture on part of the wife to make the life of husband miserableâ- Finding Of Family Court does not suffer from any perversity in appreciation of evidence or any errors of law or fact which requires any interferes in appeal.

* Wife leaves matrimonial home on many occasions
* Wife breaks mangalsutra throws it on the ground during the quarrel
* Wife has written letters to husbandâs employer urging them to take action against the husband
* Wife files false 406, 498a case wherein the husband was arrested.

HC summarizes that ââ¦â¦The primary question that arises for consideration in this appeal is whether the acquittal of the husband and his family members of matrimonial offences under Sections 406, 498-A of the Indian Penal Code would be sufficient to hold that it has caused mental cruelty to the husband so as to entitle him to a decree of divorce under Section 13(1) (ia) of the Actâ¦.â

Suicide attempt as the husband did NOT set up a separate houseÂ is cruelty. The husband gets divorce! Madras HC

* Wife attempts suicide on multiple occasions
* She is taken to the Govt Stanley medical hospital and treated
* She claims that she tried to commit suicide because husband refused to set up a separate house
* Madras HC appreciates the evidence and conduct of parties and concludes that the wife treated the husband with cruelty and so divorce granted.

498a arrest and publishing allegations and writing to superiors are cruelty. Divorce granted.

Law Point:Â Hindu Marriage Act 1955â- Section 13(1) (ia)â-Crueltyâ-Restitution Of Conjugal rightâ-False Implication of husband and his family member alleging offence under section 498A, 323, 504, 506, IPCâ-Amounts to Matrimonial crueltyâ-Irretrievable breakdown of marriageâ-Parties living separately since 2002â-Appellant-husband has withdrawn from the society of respondent-wife without reasonable excuseâ-Not a fit case for granting relief under section 9 of H.M act in her favourâ- Appellant entitled to divorce under Section 13(1)(ia).

6.IN THE HIGH COURT AT CALCUTTA. Appellate/Revisional/Civil Jurisdiction. F. A. No. 191 of 2005. Sri Debabrata Chakraborty Versus Smt. Rina Chakraborty.

False case of 406 that is not pursued, false allegations of illicit relations with other women, false allegations of venereal disease, etc which are NOT proven are matrimonial cruelty. Wife files 498a, 406 knowing that the husband is a govt servant and has to run for bail. Divorce granted to the Husband. Maintenance to son, OnlyÂ if son comes and stays with father at least once a week.

Live-in woman uses Dowry case before marriage, to rope in man, forcing him to marry her. She then promptly Files an IPC 498a (cruelty to wife case) after marriage again. The husband and parents are arrested. She goes on appeal against the husbandâs divorce. The HC appreciates the fact that the woman has filed false cases and treated the man with cruelty. The Hon HC grants divorce to the man.

Law Point:Â Hindu Marriage Act, 1955â- Section 13(1) (ia)â-Crueltyâ-Filling of the false criminal complaint itself amounts to cruelty within the meaning of section 13 (1) (ia) of Actâ-Impugned judgment and order passed by family court quashed and set aside.

The husband wins divorce on grounds of cruelty as wife regularly leaves husband files false 498a 406 where the husband is arrested. The wife also loses appeal.

Wife ALLEGES husband had ILLICIT relations with his OWN MOTHER; starves husband, insults, and makes character assassination of the father in law; husband granted the divorce on grounds of cruelty.

Law Point: The wife showing disrespect to the husband and his family members amounted to cruelty towards the Husband. Irresistible conclusion wife treated husband-respondent with cruelty.

These Judgments are helpful forÂ lawyers in India.