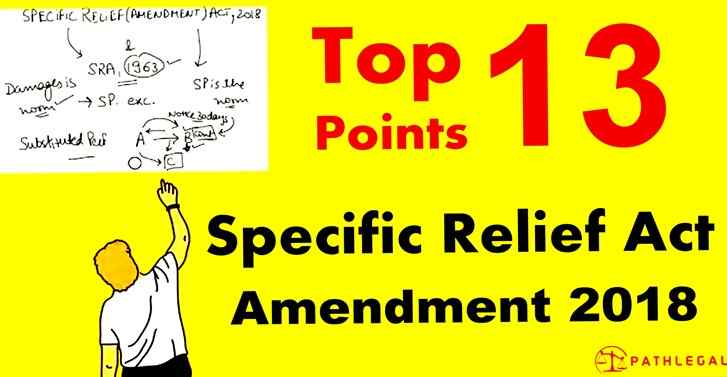 1. The specific relief act was madeÂ in 1963 and was further amended in 2018. We see tremendous economic developmentÂ in our country after the formation of the Specific Relief ActÂ of 1963, which has further helped to increase the commercial activities of our country like the foreign direct investment, public-private partnership, public utility infrastructure development, etc.Â

2. With passaging time the outdated lawsÂ present in SRA 1963, lead to delaying of infrastructure projects and other contractual projects. To tackle this situation amendment to SRA was made in 2018.

5.Â  The motive of this amendmentÂ is to ease the businesses of India so that contractors can execute the contracts in time, specific performances should be possible along with anÂ added focus on infrastructure projects.Â

8. The State GovernmentÂ withÂ the consultation of Chief Justice of the High Court will work towards the formation of the Special Court to deal with these issues. This is specified in Section 20B.Â

9. Section 20C specifiesÂ that all cases file under CPC must be disposed within 12 months with a maximum remedy of 6 months. This law facilitates faster remedy and avoids a longer delay in the fulfillmentÂ of contracts.Â

10. Section 11 of the SpecificÂ Relief Act specifies that where the contracts are connected wholly or partially with trust, the Court should enforce specific performance. A courtÂ cannot enforce a contract made by a trustee over his powers or breach of trust.Â

11. According to SectionÂ 14, the following contracts are not specifically enforceable;Â

Â 1.Â Â  A contractÂ where a party to the contract has got substituted performance.Â

2.Â  Â Â  A contractÂ where the specific performance involves the performance of continuous duty.Â

3.Â Â Â  Contract dependent on the personal qualifications of the parties.Â

12. Section 14A givesÂ the court the power to engage one or more than one expert if the court considers it necessary to get an expert opinion.Â

13. Specific performanceÂ of a contract is not enforceable in the following situations:Â

Â 1.Â Â Â  If a party has got substituted performance.Â

2.Â Â Â  If a party becomes incapable of performing or violating any essential term of the contract.Â

3.Â Â Â  If a party does not prove that he has performed or will perform the essential terms of a contract.