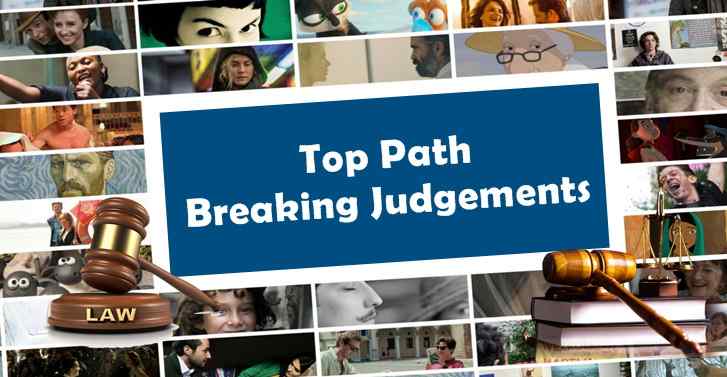 PATH BREAKING JUDGEMENTS
Today we are witnessing the 21st century, which is a modern era consisting of both mental and physical growth of the world, further, it won't be wrong calling it a Digi World or Electronic world. The world is already been moving towards major development in many fields, out of which one has been âTHE LEGAL SIDEâ which is the most responsible field in order to bring a sense of Discipline and Justice at the same time.Â

INDIVIDUAL AND GROWING LAWÂ
In this modern era, man can cut himself socially and politically, however being a part of the society he possesses fundamental rights, and as rights always come with duty so within that sphere he is bound to owe some fundamental duty. The recent Judgement of SHYAM NARAYAN CHOUKSEY Vs UOI holds a classic example of the same under which standing while playing national anthem was made non-obligatory with the reasoning that showing patriotism towards nation cant be held on the basis that one stands during playing national anthem or not.Â

TRIPLE TALAQ- LAW DEVELOPING WITH SOCIAL CHANGE
An ancient old law which falls under the category of âpersonal lawâ is been struck down by the Honâble supreme court in the case of SHAH BANO BEGUM Case which hold to struck triple-talaq (divorce) held as unconstitutional towards Article 21 that is very foundation and existence towards the humanitarian life.Â

SABARIMALA (AYYAPA TEMPLE): WOMEN AND THE POSITION UPLIFTMENTÂ
In the recent judgment passed by the five-judge bench headed by Hon'ble J. RANJAN GOGOI lifted a veil upon the century-old law for banning of entry of women in Ayyapa temple of South having age group from 10-50 years of which counter or reasoning given for such ban was that in the said age group women hold puberty and it will impure the sanctity of the temple.

DECRIMINALSING SECTION 377 IPC
A law which was then codified in the earlier 1860 providing penal punishment for â UNNATURAL OFFENCESâ which âpenalize for having physical intercourse with the same genderâ was struck down by the Honâble supreme court in NAVTEJ SINGH JOHAR Vs UOI holding it unconstitutional against Article 14 of the constitution of India.Â

CONCLUSION :
The above-mentioned condition doesn't hold the exhaustive list of path-breaking judgment which describes the changing phase of humans in the felid of different social sciences. It is only the Law that leads towards the growing of human psychology in a Tracked and Ordered manner. So, Law time and again modify itself in order an individual apart of his social status and capability can lead towards a peaceful and Rightful and Dignified life.