UP: Seeking Food From Neighbour Amid Lockdown By Woman, Angry Husband Gives Her âtriple talaqâ 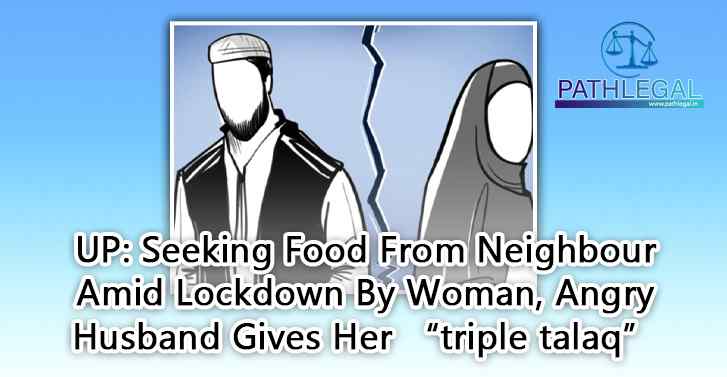 A shocking incident has been reported from Bareilly district of Uttar Pradesh where a man has pronounced instant triple talaq (divorce) to his wife on Thursday. Her crime? she had arranged food from her neighbour during the lockdown.Â

The man first thrashed his wife and later pronounced 'triple talaq'. The man, who is a labourer, had no work during the lockdown. When there was nothing to eat at home, his wife sought help from a neighbourÂ and managed to arrange food.Â

According to a report in Hindi daily Dainik Jagran, the man got angry over his wife's act and pronounced instant triple talaq, which has now been outlawed. The incident has been reported from Old City area under Baradari police station limits in Bareilly district.

After the incident, the woman approached police and filed a complaint demanding action against her husband.Â

According to the victim Zarina, she got married to Zulfiqar 12 years ago and has two children with him. When she ran out of ration, Zarina sought help from her neighbour and they provided her food following which her husband badly thrashed her.

When she resisted the assault, the man pronounced 'triple talaq'.

Baradari Inspector Naresh Tyagi said he is looking into the complaint and will take action in this regard.Â

In July 2019, Modi government promulgated a law to ban the practice of triple talaq as illegal and made it a punishableÂ offence.