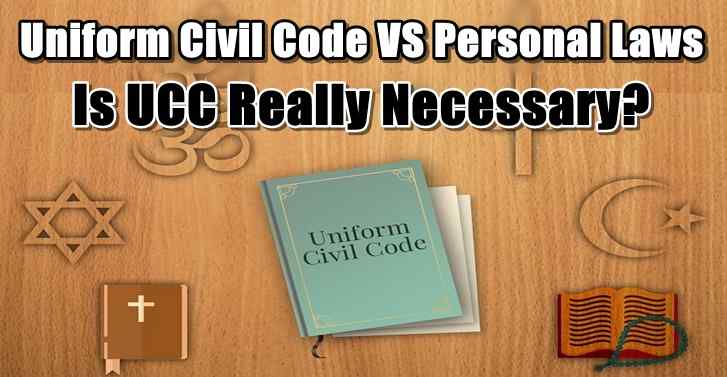 Uniform Civil Code place a set of laws to govern personal matters of all citizens irrespective of religion is perhaps the need of the hour and ensuring that their fundamental and Constitutional rights are protected.

It is the common set of governing rules for all citizens of India which refers to replace the personal laws (based on religious s c r i p tures and customs). These laws are famous from public law and cover marriage, divorce, inheritance, adoption and maintenance. In factÂ Goa is the only state which has a common family lawÂ and 1954 Special Marriage Act allows any citizen to marry outside the realm of any special religious personal law.

The British Government in 1840Â on the basis of Lex Loci report had framed Uniform laws for crimes, evidences and contract but personal laws of Hindus and Muslims are left by them somewhere intentionally. On the other hand British India Judiciary provided for application of Hindu, Muslim and English law by British Judges. Also, in those days reformers were raising voice to frame laws related to women against the discrimination done by them basically under religious customs like Sati etc.

Constituent AssemblyÂ was set up to frame our Constitution inÂ 1946Â in Independent India which consists of both types of members: those who wanted to reform the society by adopting Uniform Civil Code like Dr. B. R Ambedkar and other was basically Muslim representatives who perpetuate personal laws. Also, the proponents of Uniform Civil Code were opposed by the minority communities in the Constituent Assembly. As a result only one line is added in the Constitution underÂ Article 44 in Part IV of DPSPÂ (Directive Principles of State Policy).

Making of the constituent assembly

It states that âThe State shall endeavour to secure for the citizens a Uniform Civil Code throughout the territory of Indiaâ.Â As it is incorporated in DPSP they are neither enforceable in the court nor any political discrepancy been able to go beyond it because minorities mainly Muslims felt that their personal laws are violated or abrogated by it. Then aÂ series of Bills were passedÂ to codify Hindu laws in the form of Hindu Marriage Act, 1955, The Hindu Succession Act, 1956, The Hindu Minority and Guardianship Act, 1956 and the Hindu Adoption and Maintenance Act, 1956, are collectively known asÂ Hindu Code BillÂ (covers Buddhist, Sikhs, Jains as well as different religious denominations of Hindus) which allows right to divorce and inheritance to women, made caste irrelevant to marriage and abolished bigamy and polygamy.

Also mere three words regarding UCC not only affect our nation but are also enough to divide the nation in to two categories due to which to take decision on it becomes a little difficult. These three words areÂ politically, socially and religiously.Â Politically, the nation is divided as BJP propagates the implementation of Uniform Civil Code (UCC) and the non BJP like Congress, Smajwadi Party who donât want to implement UCC. Socially, the literate persons of the country who have analysed the pros and cons of UCC & on the other hand illiterate who have no idea about it and being in hands of political pressure they will take decision. And religiously, there is a gap between the Hindus that are in majority and Muslims minority community.

Do you know that in 1985, the Supreme Court first directed the Parliament to frame a UCC?

Mohammad Ahmed Khan v. Shah Bano BegumÂ mainly known as Shah Bano Case. In this case inÂ 1985,Â Shah Bano moved to Supreme Court for seeking maintenance under section 125 of the Code of Criminal Procedure when her husband divorced her after 40 years of marriage by giving triple talaq and denied her regular maintenance.Â The Supreme Court gave verdict in favour of Shah Bano by applying section 125 of Indian Criminal CodeÂ and it is applied to all citizens irrespective of religion. Then Chief Justice,Â Y.V Chandrachud,Â observed that a Common Civil Code would help the cause of national integration by removing disparate loyalties to law. And so, the court directed Parliament to frame a UCC.

On the other handÂ Rajiv Gandhi GovernmentÂ was not satisfied from the court decision; instead of supporting it the government enacted theÂ Muslim Women (Protection of Rights on Divorce) Act, 1986Â to nullify the Supreme Court judgement in Shah Bano Case and let the Muslim Personal Law prevails in divorce matter. In this act it was mentioned that Muslim woman has right for maintenance only for three months after the divorce i.e. iddat and then shifted her maintenance to her relatives or Wakf Board.

This is the second instance in which the Supreme Court again directed the government under Article 44. In this caseÂ Sarla Mudgal v Union of India,Â the question was whether a Hindu husband, married under the Hindu law, by embracing Islam can solemnise second marriage. The Supreme Court held that adopting Islam for a second marriage is an abuse of Personal laws. Further said that Hindu marriage can be dissolved under Hindu Marriage Act, 1955 i.e. mere by converting itself in to Islam and marry again does not dissolve the marriage under Hindu Marriage Law and thus will be an offence underÂ Section 494[5] of the Indian Penal Code.

The Priest from Kerala, John Vallamatton filed a writ petition in the yearÂ 1997Â stating thatÂ Section 118 of the Indian Succession ActÂ was discriminatory against the Christians as it imposes unreasonable restrictions on their donation of property for religious or charitable purpose by will. The bench comprising of Chief Justice of India V.V Khare, Justice S.B Sinha and Justice A.R. Lakshamanan struck down the Section declaring it to be unconstitutional. Further Khare stated that;

âArticle 44 provides that the State shall endeavour to secure for all citizens a Uniform Civil Code throughout the territory of India. It is a matter of great regrets that Article 44 of the Constitution has not been given effect to. Parliament is still to step in for framing a common civil code in the country. A Common Civil Code will help the cause of national integration by removing the contradictions based on ideologiesâ.

On passing the verdict ofÂ Juvenile Justice (Care and Protection of Children) ActÂ seems to be an attempt in moving towards UCC. As, it paved the way for an adoption of child by persons from Muslim Community even though not allowed under their personal laws. The Supreme Court of India again asked the Union Government to form a UCC to remove gender inequality and abolish the retrograde practices followed under the framework of personal laws.Â

After seeing all these cases again a question arises what is the importance and need of UCC?

As, Common Civil Code would put in place a set of laws to govern personal matters of all citizens irrespective of religion is perhaps the need of the hour. In fact, it is the cornerstone of true secularism. Such a progressive reform would not only help end discrimination against women on religious grounds but also strengthen the secular fabric of the country and promote unity. There is a need to reform our social system, which is full of inequities, discriminations and other things which conflict with our Fundamental Rights. As we know that there is aÂ Criminal CodeÂ which is applicable to all people irrespective of religion, caste, tribe and domicile in the country but there is no similar code related to divorce and succession which are governed by Personal laws.

Need of UCC is related to inconsistencies in Tax laws. Like in Hindu Undivided Families they are exempted from taxes where as Muslims are exempted from paying stamps duty on gift deeds and also it deals with the problem of Honour killings by extra constitutional bodies like Khap Panchayats.

As we have seen that the success of the contentious bill to ban instant triple talaq is now punishable. Suddenly the possibility of a UCC, though by no means an easy task but it does not appear as unachievable. Also, more aspects of personal laws are likely to be taken up for scrutiny which marks the incremental progress towards UCC. Moreover, the government's decision in relation to Article 370 is also a monumental decision towards national integration.

Article 25Â states Freedom of conscience and free profession, practice and propagation of religion. So, the UCC cannot be forcefully imposed on the people as then it will be clearly violation of Article 25 if the Indian Constitution. Therefore, UCC and Personal laws should be co-existed. As, UCC is nothing but the incorporation of modern and progressive aspects for all existing personal laws which canât be ignored.

After Independence, State of Goa has adopted theÂ Portuguese Civil CodeÂ which enforced a UCC for all its citizens. Under this code, Married couple holds joint ownership in all assets owned and acquired by each spouse. Even Parents canât disinherit their children entirely at least half of the property must be passed on to them. Muslim persons who have registered their marriage in Goa are not allowed to practice polygamy.

Pros of Uniform Civil Code
- To provide equal status to all citizens irrespective of their religion, class, caste, gender etc.
- To promote gender equality. UCC will bring both men and women at par.
- To To accommodate the aspirations of the young population and to utilise their full potential towards nation building.
- All Indian citizens are equal before the court of law. That is the criminal laws and other civil laws except personal laws are same for all. So, UCC is necessary to promote the national integration.
- To bypass the issue of reform of existing personal laws.

- Due to diversity in India it is somewhere tough to come up with a common and uniform set of rules but our Government is trying to come up with common rules.
- Several communities, mainly minority communities perceive Uniform Civil Code as an encroachment on their rights to religious freedom.
- In personal matters, interference of state. As the constitution provides for the right to freedom of religion of one's choice. But with the codification of uniform rules and it compulsion may reduce the scope of the freedom of religion.
- To bring UCC is a sensitive and tough task but not impossible.

With changing times, the need has arisen for having a Common Civil Code for all citizens, irrespective of religion, ensuring that their fundamental and Constitutional rights are protected. Even Secularism and National Integrity can also be strengthened by introducing UCC.