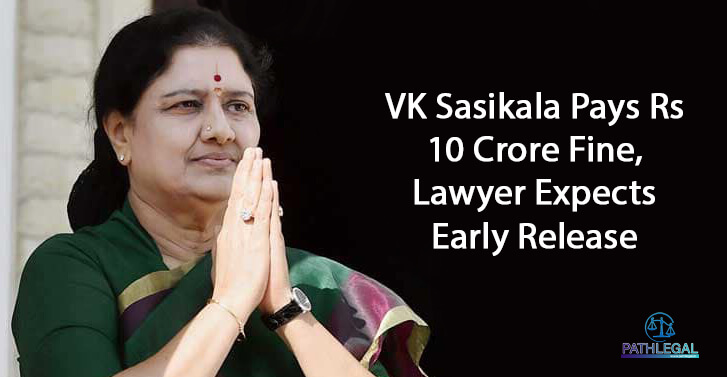 Former Tamil Nadu Chief Minister J Jayalalithaa's aide VK Sasikala has paid theÂ â¹Â 10 crore fine she was served in a disproportionate assets case on Wednesday and is expected to be released from prison soon, her lawyer said on Wednesday.

The fine was deposited at a court in Bengaluru through demand drafts, the 69-year-old's counsel N Raja Senthoor Pandian said.

The court is now expected to inform prison authorities about the payment of fine and "I expect her to be free soon, earlier than the scheduled release date of January 27, 2021," he told news agency PTI.

Ms Sasikala's two relatives, who too were jailed for four years and finedÂ â¹Â 10 crore in the assets case, are in the Parappana Agrahara Central Jail as well. Ms Sasikala's lawyer said the process to pay the fine for the two others was also being taken up.

In 2017, after the Supreme Court restored the Bengaluru trial court judgment against Ms Sasikala and her two relatives, V N Sudhakaran and J Elavarasi in the assets case, the former Chief Minister's confidante surrendered before the Karnataka court on February 15, 2017, and she has been serving her sentence since then.

The trial court had in 2014 convicted J Jayalalithaa and three others on charges, including corruption and criminal conspiracy, 18 years after the disproportionate assets case was filed against her. The AIADMK matriarch was also finedÂ â¹Â 100 crore.

In 2015, the Karnataka High Court had set aside the trial court's order convicting Ms Jayalalithaa and three others.

With the death of J Jayalalithaa in December 2016, the appeal against her by Karnataka was scrapped.