What Are The Procedures For A Mutual Consent Divorce In India? 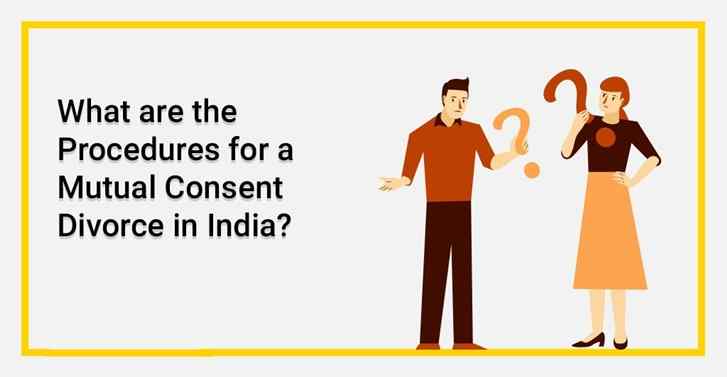 Section 13B, inserted in the Hindu Marriage Act in 1976Â to introduce divorce through mutual consent, provides for a total 18 months before a decree for divorce can be passed. Under Section 13B(1), a divorce petition can be moved by a couple following a judicial separation of one year. This may be followed by another six months of waiting period under Section 13B(2) for getting a decree.

Held that provision of Section 13B(2) is not mandatory but directory. Apex Court has stated that, the courts can grant divorce after waiving of six months' waiting period on being satisfied that the "waiting period will only prolong their agony" and that all efforts of conciliation have been futile. The courts, waiving of the cooling off period will also consider whether the estranged couple has settled all differences relating to alimony, custody of children etc.

Section 14 provides thatÂ No petition for divorce to be presented within one year of marriage provided that the Court may, upon application made to it in accordance with such rules as may be made by the High Court in that behalf, allow a petition to be presented [before one year has elapsed]since the date of the marriage on the ground that the case is one of exceptional hardship to the petitioner or of exceptional depravity on the part of the respondent, but, if it appears to the Court at the hearing of the petition that the petitioner obtained leave to present the petition by any misrepresentation or concealment of the nature of the case, the Court may, if it pronounces a decree, do so subject to the condition that the decree shall not have effect until after the [expiry of one year] from the date of the marriage or may dismiss the petition without prejudice to any petition which may be brought after the[expiration of the said one year] upon the same or substantially the same facts as those alleged in support of the petition so dismissed.

The Divorce Proceedings can take place by adopting two procedures which are as follows:

The Procedure for Filing for Mutual Divorce:

Important Issues to be Settled before Proceeding:

Where can the Mutual Divorce Petition be filed?

Steps to be undertake to Dissolve the Marriage by Mutual Consent:

Joint petition for dissolution of marriage for a decree of divorce is presented to the Family Court by both the spouses on the ground stating that they have not been ableÂ to reconcile the differences and live together. Thus, have mutually agreed to dissolve the marriage or they have been living separately for a period of one year or more. This petition has to be signed by both the parties.

2.Â Appearance before the Family Court Judge for First Motion for Divorce

Both the parties will enter their appearance in the Court along with their legal counsels. Family Court Judge will go through the contents of the petition along with all the documents presented in the Court. Court may attempt to reconcile the differences between the spouses, however, if this is not possible, the matter proceed further.

After going through the contents of the application, Court may order the party's statements to be recorded on oath.

4.Â First Motion order is passed, 6 Months Time period is given for the Second Motion

An order on the first motion is passed by the court. After this, a six months period is given to both the parties to a divorce, before they can file the second motion. The maximum period to file for a second motion is 18 months (Discretionary power of the court) from the date of presentation of the divorce petition in the family court.

Once the parties have decided to go further with the proceedings and appear for the second motion, they proceed with the final hearings. This includes parties appearing and recording of statements before the Family Court.

If the court is satisfied after hearing the parties that the contents in the petition are true and that there cannot be any possibility of reconciliation and cohabitation and the issues pertaining to alimony, custody of children, properties etc are settled, Court can pass a decree of divorce declaring the marriage to be dissolved.

Then Divorce becomes final once the decree of divorce has been passed by the court.